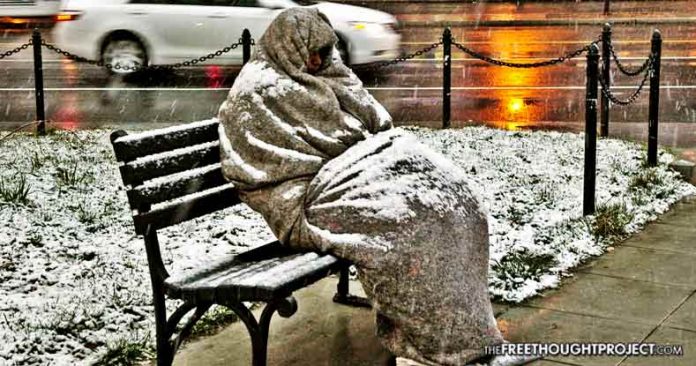 The city of Chicago would seemingly rather watch homeless people die than allow a good Samaritan to offer up his home that doesn’t meet their specs.

Source: City Tells Man to Stop Sheltering the Homeless from the Cold or They’ll Take His House

Chicago, IL — In the land of the free, if you try to help someone from freezing to death in subzero temperatures, you can and will be arrested and have your house stolen from you by state agents. A good Samaritan in Chicago is learning the hard way about the police state who is now forcing him to stop helping homeless people—or they will condemn his home and charge him.

When the brutally cold winter struck the Midwest last month, Greg Schiller did an amazing thing. This selfless individual opened up his empty basement to a group of homeless people who may have otherwise died sleeping out on the street. He offered them food, warm beverages, and cots to sleep on. He even provided the entertainment and played movies for them.

“I would stay up all night with them and give them coffee and stuff and feed them,” he said. What’s more, Schiller had a strict policy that no drugs or alcohol were allowed in his home.

This is Schiller’s second year of inviting the area’s homeless into his home. Last year, however, he let them sleep in his garage and even though it was sealed off from the elements, it was still too cold and EMTs were called to help a man with a heart condition. So, this year, he moved the same operation to the basement where it was nice and cozy.

Everything was going great this year until the state stepped in, however. Schiller was essentially told that even though he owns his home, he does not get a say in who gets to sleep in it.

“While we appreciate those who volunteer to provide additional resources in the community, Mr. Schiller’s house does not comply with codes and regulations that guard against potential dangers such as carbon monoxide poisoning, inadequate light and ventilation, and insufficient exits in the event of a fire,” city spokesperson Molly Center said in a statement—as if the homeless population is being forced to stay in this basement.

Once they found out that a good Samaritan would dare challenge their almighty dictate on “sleeping regulations,” the city sent in police with a warrant and told him to shut it down, or else.

“They shut me down and said I have 24 hours to return my basement to storage and take down – I have several cots with sleeping bags for everybody – or they’ll condemn the house,” said Schiller.

One would think that as this story began to get more coverage in the local press that the government would potentially back off due to backlash from the citizens. However, one would be wrong.

When confronted about the situation, Center issued a statement doubling down on Schiller’s 24-hour notice, adding, “If not, the City will take additional enforcement action to compel the removal of the unlawful basement sleeping area.”

Aside from essential theft of property via condemnation, Schiller says he was also threatened with a slew of citations. Citations—that would ultimately be enforced with police force.

“I’m trying to help these people get out of the cold,” he told NBC 5. “There’s not a lot of help for them as far as places to lay their heads.”

Sadly, however, the state would rather see the area’s homeless die—or create a burden on the already over-populated, taxpayer-funded shelters in the area—than allow good Samaritans to help them.

“Elgin has lawful shelters that provide a safe space for people to go throughout the year,” Center said in a statement. “In times of extreme temperature, temporary locations open within the community that all conform to regulations and codes.”

The area shelters, however, only open when the temperature drops below a certain threshold of 15 degrees or less. If they are one degree higher, these folks are out of luck.

Sadly, because Schiller knows that if he opens up his home to those in need again, he will be cited and possibly lose his house, he is going to comply with the city order—albeit under duress.

How, exactly, will this inhumane ordinance affect those who were finding shelter at Schiller’s home? Well, according to Schiller, “Somebody’s going to die.”