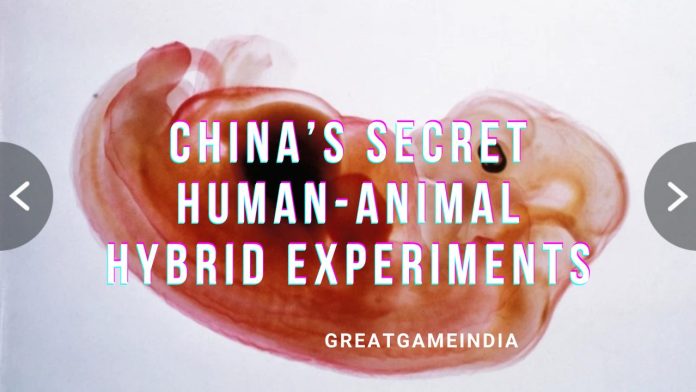 China is conducting secret Frankenstein-style human-animal hybrid experiments creating super viruses, human-monkey hybrids, human head transplants on monkeys and pigs, gene-editing babies, super soldiers etc. Most of these experiments are exported out of western countries since they were shutdown in the west due to heavy criticism.

It is now known that China has been carrying out all kinds of dangerous and ethically controversial research which may not be allowed in Western countries.

It is also known that scientists from other countries outsource controversial and unethical experiments to labs in China.

Human-monkey hybrids, head transplants, souped-up viruses and gene editing are just some of the tests known to have been carried out by Chinese scientists.

The US had already banned “Franken-virus” experiments as they pose a great threat of enhanced virus leaking from labs – which may cause devastating pandemics – just like the one the world is experiencing right now.

Other experiments on animals and human genes were also banned in the West, so those may also be shipped out to China to dodge regulatory or ethical considerations.

“It is inexcusable and irresponsible that some countries of the Western world are ‘outsourcing’ risky biotechnological research to countries like China.”

“In some cases, this is even done because ethical rules which exist in most parts of Europe would prohibit some classes of biotechnological research to be conducted in the home countries.”

In order to emerge as a biotech superpower, China is planning to build up to seven more high security labs – the same as the Wuhan Institute of Virology by 2025.

An official from the US embassy in Beijing told the Washington Post that there was an “entire galaxy of activity, including labs and military labs in Beijing and Wuhan playing around with coronaviruses in ACE2 mice in unsafe labs.”

Chinese scientists are known to have been carrying out research to make the viruses more infectious.

Such experiments were originally banned in the US in 2014 – but were reintroduced by the National Institutes of Health (NIH) in 2017.

The research was conducted to prepare the world to fight against such pandemic. But it also had a risk of virus leak from the labs.

NIH had funded this dangerous research in the WIV through a grant to the EcoHealth Alliance.

Dr Wiesendanger told The Sun Online a virus created or modified within the lab could be even more devastating than Covid – potentially with a death rate of up to 80 per cent.

He said: “Current biotechnological methods, as used in gain-of-function-experiments, could potentially be used to combine properties of viruses with a very high human-to-human transmission rate and a very high death rate.”

“We urgently need international regulations and surveys for these types of experiments.”

Richard Ebright, a molecular biologist at Rutgers University in New Jersey, previously told The Sun Online: “Gain-of-function research of concern — no matter where it is performed — risks creating new pandemic pathogens and of triggering new pandemics.”

Five years ago, Italian state owned media Company, Rai – Radiotelevisione Italiana, exposed how Chinese scientists were conducting biological experiments on a SARS connected virus believed to be Coronavirus, derived from bats and mice, asking whether it was worth the risk in order to be able to modify the virus for compatibility with human organisms.

The world’s first ever human-monkey hybrid was developed by Chinese scientists, in 2019. It was named as  “humanzee” or “chimp-man-zee”.

It is said that the experiment was kind of a partial success as the embryo showed a “red line” in 14 days’ gestation. It means it can not grow.

But it has started developing the nervous system. The hybrid creature could have grown and been born, but scientists aborted the process.

Scientists on the team from the Salk Institute for Biological Studies and the Murcia Catholic University even admitted it was carried in China to dodge ethical concerns.

In the US, federal funds cannot be used to create mixed human-monkey embryos – while there is no such rule in China.

The experiment caused controversy as it was branded “disturbing” by one scientist, and even the team themselves raised ethical questions about the hybrid.

Christina Lin, a California-based foreign and security policy analyst, has written about her concerns in the Asia Times.

“China is… viewed as a dumping ground and giant test tube for all kinds of dangerous and ethically controversial research outlawed by Western countries, similar to how it became a dumping ground for recyclable waste in past decades.”

Their ultimate goal is to carry out the world’s first human head transplant on a human.

The experiments to develop the world’s first monkey-pig hybrids were conducted at the State Key Laboratory of Stem Cell and Reproductive Biology in Beijing.

Out of more than 4000 implants only 10 piglets were born and out of those 10 only two were the hybrids. Both the chimeras — animals who have cells from two different species — died within a week.

About another experiment that aimed at making monkeys smarter by infusing monkey’s genes with human genes that are responsible for human brain development, Dr James Sikela, of the University of Colorado, said:

“The use of transgenic monkeys to study human genes linked to brain evolution is a very risky road to take.”

“It is a classic slippery slope issue and one that we expect to recur as this type of research is pursued.”

Chinese scientist He Jiankui created the world’s first gene-edited babies in 2019 – in order to make the girls resistant to the AIDS virus. With his team, he was involved in the births of three spliced tots from two women.

He said he had used a tool called CRISPR to try to disable a gene that allows the AIDS virus to enter a cell.

The experiments were dubbed “monstrous” by others within the scientific community – and even China took action as he was jailed for three years.

According to the US intelligence officer, Chinese scientists are conducting certain experiments on their soldiers in order to develop “biologically enhanced” soldiers.

“While the potential leveraging of [gene editing] to increase human capabilities on the future battlefield remains only a hypothetical possibility at the present, there are indications that Chinese military researchers are starting to explore its potential.”

The paper also quoted a Chinese general who, speaking in 2017, said that “modern biotechnology… will have revolutionary influences upon weapons and equipment, the combat spaces, the forms of warfare, and military theories”.

Recently, China sent its Super Soldiers equipped with exoskeleton to the disputed Himalayan border with India.

For latest updates on the outbreak check out our Coronavirus Coverage.