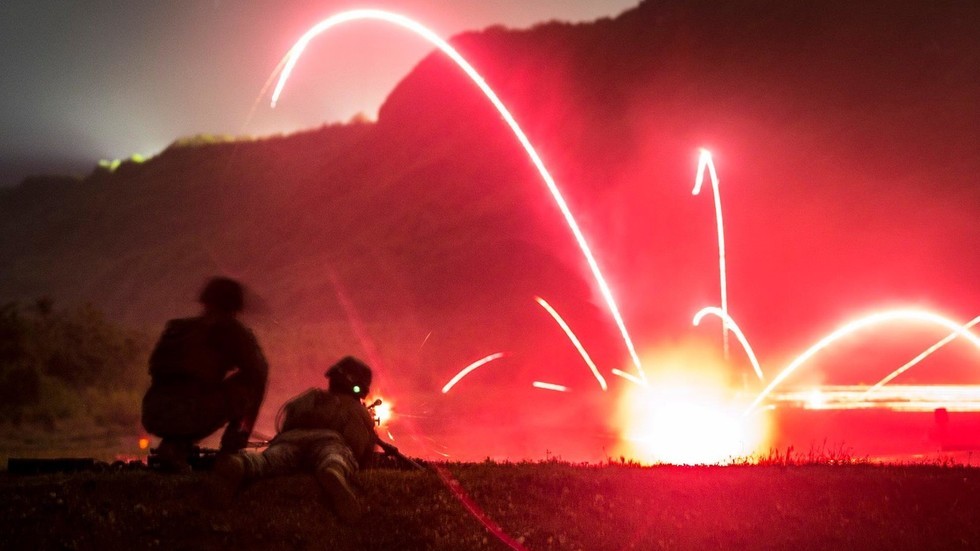 US special forces, aided by F-35 stealth fighters and rocket artillery units, have practiced capturing a small Japanese island as part of a new operational concept to counter China in the Indo-Pacific theater.

US special forces, aided by F-35 stealth fighters and rocket artillery units, have practiced capturing a small Japanese island as part of a new operational concept to counter China in the Indo-Pacific theater.

Members of the US Marines, Army and Air Force invaded and secured Japan’s Ie Jima Island as they polished-up their Expeditionary Advance Base Operations (EABO) skills, which haven’t been put into practice since the end of America’s fight against the Japanese in World War II.

US airmen conducted reconnaissance of the island off the coast of Okinawa before ground troops and Marines were deployed in “a 600-mile long-range raid” to seize an airfield, according to a Marine Corps statement.

After capturing the airstrip, the US forces proceeded to set up the required infrastructure for Marine Corps F-35B Lightning II Joint Strike Fighters and C-130J Super Hercules aircraft to land. Finally, rocket artillery units were brought in just as the stealth fighters practiced their precision-guided strikes in an exercise that extended from March 11–14. Source: China war drills: US commandos capture Japanese island to show Beijing they’re ‘not kidding around’ — RT World News

The new US island-capturing, power-projection strategy is “critical” to counter China’s growing influence in the Indo-Pacific, General Joseph Dunford, chairman of the Joint Chiefs of Staff, told the Senate Armed Services Committee this month.

“We are ready to rapidly seize ground and project lethal combat power,” Col. Robert Brodie, 31st MEU commanding officer said. “You just want to make the Chinese think twice about asserting their claims…that’s a clear signal to the Chinese that they’re not kidding around.”

Though EABO still remains in the experimentation stage, pending approval by Chief of Naval Operations Admiral John Richardson, the concept is being designed to allow the US military to operate in close proximity to the enemy to “distribute lethality” after securing sea platforms from the adversary.

While Beijing has yet to issue a statement on the drills, in the past China has vowed to protect its borders by all means necessary. Fearing a potential outbreak of conflict amid an ongoing trade dispute with the US, Chinese president Xi Jinping has repeatedly told his troops to be better “prepared for war”.