On Monday, People’s Daily, China’s leading newspaper, stated it was time for Beijing to consider using its “financial weapon” against the United States.

The Communist Party’s flagship publication suggested that the Chinese government “directly link” its purchases of US Treasury debt to Taiwan arms sales and “require” ratings agencies to downgrade the United States in order to force up interest paid to China. China should also “launch limited trade sanctions” against states whose representatives in Congress support Taiwan. “China-US relations will always be constrained by these people and will continue along a roller coaster pattern if China does not beat them until they feel the pain,” the paper said.

The context for the stinging piece in the party’s self-described mouthpiece may be proposed arms sales to Taiwan, but the general message is clear: China should use its holdings of American obligations to accomplish its many geopolitical aims. “In fact, China has never wanted to use its holdings of US debt as a weapon,” the paper noted. “It is the United States that is forcing it to do so.” 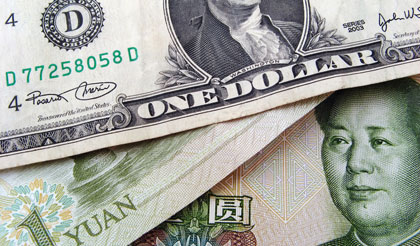 The People’s Daily piece is just the latest of Beijing’s blistering attacks in the last ten days on the debt issue. The official Xinhua News Agency, for instance, issued two recent attacks on the United States. The more important of the two, on Saturday, called for international supervision over Washington’s printing of dollars and suggested consideration of a new international reserve currency to replace the greenback “to avert a catastrophe caused by any single country.”

The first of Xinhua’s suggestions is ludicrous and will never be implemented. The second suggestion reflects Beijing’s fond hopes of dethroning the dollar. Unfortunately for China, America’s money will remain the world’s reserve currency for the foreseeable future simply because there is no alternative to it.

Chinese officials are obviously in huff-and-puff mode, but their tirades reveal they are out to undermine the United States. For all the effort that Washington has put into integrating China into the international community over the last three decades, Beijing refuses to be drawn in.

Chinese officials, in recent days, have essentially declared an economic war on the United States. Perhaps it is time for us to think of China as a geopolitical adversary and not just a friendly trading partner. Beijing, by its own words, has revealed itself to be a foe. The question is whether we will recognize its hostile intent and respond.