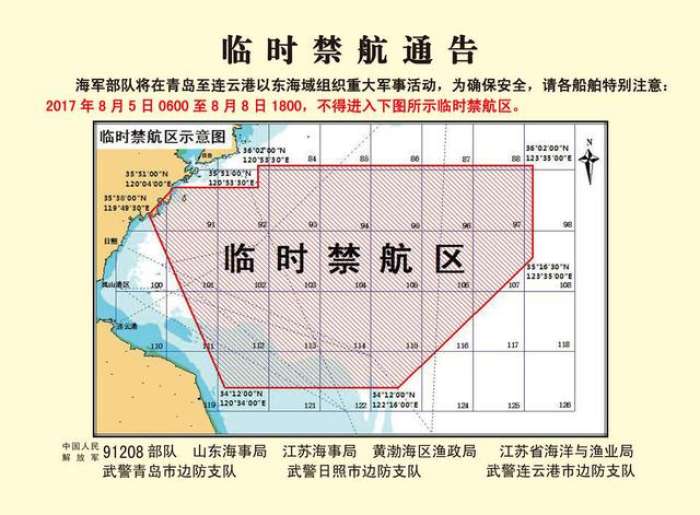 Beijing has declared an area the size of West Virginia off-limits to civilian vessels, ahead of extensive three-day naval exercises near the coast of North Korea. A similar drill took place in the area at the end of July.

Chinese Navy to hold major military event in the Yellow Sea, marks out no-entrance zone from 06:00 Aug 5 to 18:00 Aug 8 pic.twitter.com/LDDizbNIxR

The announcement only said that the drills would last between 6 am on Saturday and 6 pm Tuesday, and would involve “large-scale military operations.”

China commissioned 18 ships last year. While it currently only operates one Soviet-made aircraft carrier, trials are ongoing on the second vessel, wholly built in a local shipyard.

According to local analysts, the timing and choice of location for the current exercises is more to do with reasserting China’s regional power than an immediate need to test new hardware.

“This is a very normal part of diplomacy – there are talks and negotiations, but there is always in the background some sort of drum-beating,” Collin Koh from Singapore’s Nanyang Technological University told the South China Morning Post (SCMP), saying that the drills are primarily a signal to Washington that North Korea is still under its protection.

Koh warned that while the drills do not represent immediate escalation, there is an element of “danger” as regional powers “are all quite heavily armed and are operating in quite a constricted space.” In recent days North Korea’s rhetoric has been as belligerent as ever, as Pyongyang cautioned Washington against trying restrict its missile and nuclear program.

“Every minute and every second, the new reality that US mainland is on the knife’s edge of life and death is forcing US administration to wave a white flag and fundamentally change her North Korea policy,”declared a piece in the official party newspaper Rodong Sinmun. “It is not the denuclearization of N. Korea, but the security of US mainland which should be the top priority of Trump administration.”

China’s naval exercises will take place as the US Secretary of State Rex Tillerson, China’s foreign minister Wang Yi, and their Russian counterpart Sergey Lavrov meet in Manila during a forum of ASEAN top diplomats. Their talks will likely touch upon the issue of potential sanctions against North Korea over its missile tests, as well as the existing tensions between Washington and Beijing over trade and US placement of its THAAD missile defense system in South Korea.

Beijing’s growing naval capability may add another wrinkle to the talks, in particular its desire to take control of the key waterways of the South China Sea, which also caused concern to the Obama administration. HaTTiP