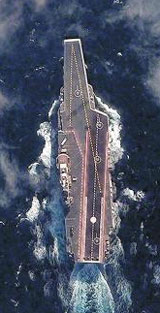 The Chinese military has revealed that it intends to put its first aircraft carrier, the Varyag, into commission this year after the 67,000-ton vessel completes a number of

Insiders see Aug. 1, the anniversary of the establishment of the China’s People’s Liberation Army (PLA), as the likely date for the ship’s official inauguration.

Xu Hongmeng, the PLA’s deputy Navy Commander, told reporters at the National People’s Congress in Beijing on Thursday that, “The trials have gone very smoothly, and we plan to put it into commission this year.” This is the first time that the PLA has officially mentioned the timing for the inaugural test.

“Trial runs for the Shenyang J-15, a carrier-based fighter aircraft that will operate from the Varyag are also in the pipeline,” Xu added. Take-off and landing tests for the aircraft are expected to be carried out this month, along with further test runs of the Varyag.

Once it goes into commission, the vessel will be based in Hainan Island in southern China to cover the East China Sea and South China Sea, which are the sites of territorial disputes with Japan and other Southeast Asian countries. Tension in these seas is expected to heighten when the Varyag starts its official duties there.

The aircraft will patrol the waters off Korea’s Ieo Island, which China claims is an extension of the continental shelf that falls under its jurisdiction.