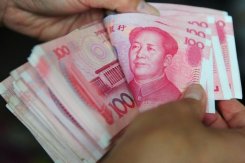 BEIJING, China (AFP) – Beijing expressed hope on Thursday that the United States would not pass a bill to punish China over its alleged currency manipulation.

US senators unveiled the bill last week amid deep anger at stubbornly high US unemployment of over nine percent, with the sour economy the top issue on voters’ minds as the race to the November 2012 elections heats up.

Democratic Majority Leader Harry Reid on Monday predicted the legislation — opposed by the White House — would pass, but China’s foreign ministry said it hoped lawmakers would not push through the bill.

“We hope that the two countries can solve problems on the basis of mutual respect and equality and in keeping with WTO (World Trade Organisation) rules, rather than politicising economic trade issues and resorting to trade protectionism,” said ministry spokesman Hong Lei.

“We hope the US lawmakers safeguard the smooth development of China-US economic relations… and will reconsider their decision and refrain from pushing through the bill.”

The bill aims to make it harder for the US Treasury Department to avoid labelling Beijing a currency cheat, which could trigger sanctions, while making it easier for US companies to seek retaliatory tariffs on Chinese goods.

A study released this week by the left-of-centre Economic Policy Institute found that the US trade deficit with China has eliminated or displaced nearly 2.8 million jobs since 2001.

And US lawmakers have increasingly criticised Beijing on other economic issues, including rampant intellectual property theft like pirated movies and “indigenous innovation” policies that favor Chinese businesses.

However, 51 US industry groups this week stepped up efforts to block such legislation, warning in a letter to senators that it could spark a “counterproductive” trade war.

The bill would rewrite the law to make it harder for the US Treasury Department to stop short of declaring China a currency manipulator and makes manipulation punishable with countervailing duties on the offending country’s goods.

It aims to restrict the White House’s ability to waive those trade duties, notably by requiring reports to Congress detailing how not taking action outweighs the benefits.

China has a history of allowing the yuan to strengthen slightly when it expects to come under heightened pressure over the value of its currency.

China’s leaders “get away with economic murder” by keeping the yuan, and thereby the country’s exports, artificially cheap, Democratic Senator Chuck Schumer, a key backer of the bill, charged last week.