Recently, I was the guest on a leading-edge podcast “The Portal,” hosted by Eric Weinstein. The conversation was a deep-dive exploration of Project Veritas and our methods. 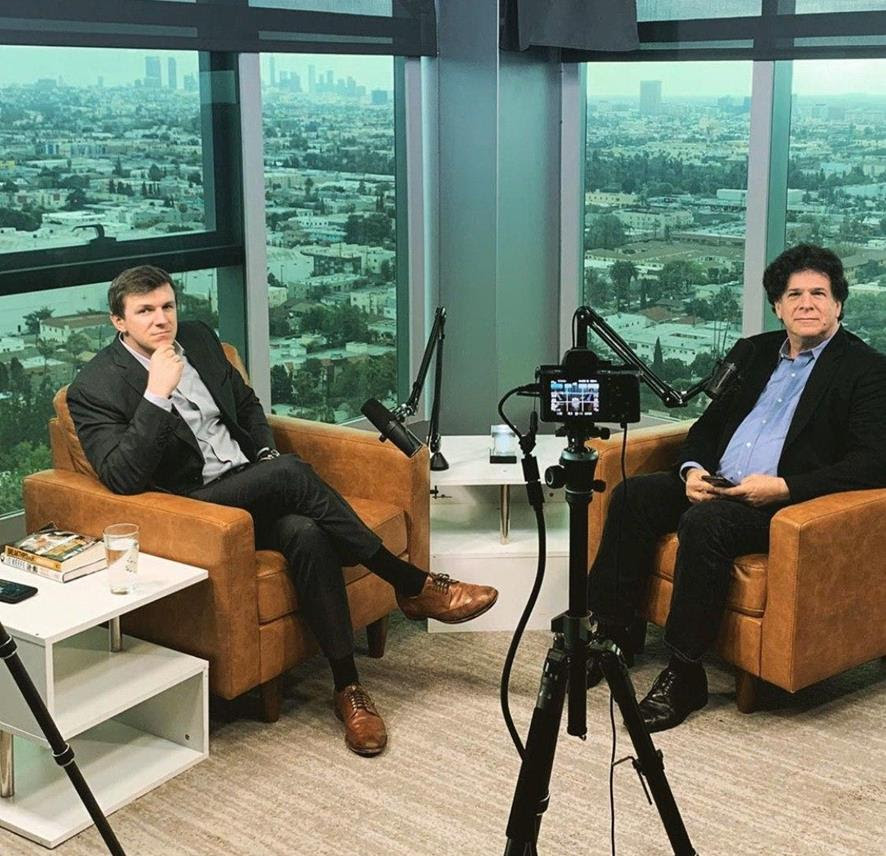 It all started with a Twitter exchange after I Tweeted that ABC News suspended veteran political reporter David Wright after we posted undercover video of him admitting that his bosses see no upside in covering new that is important to voters and that his bosses refuse to give credit to President Donald Trump for the things he gets done. 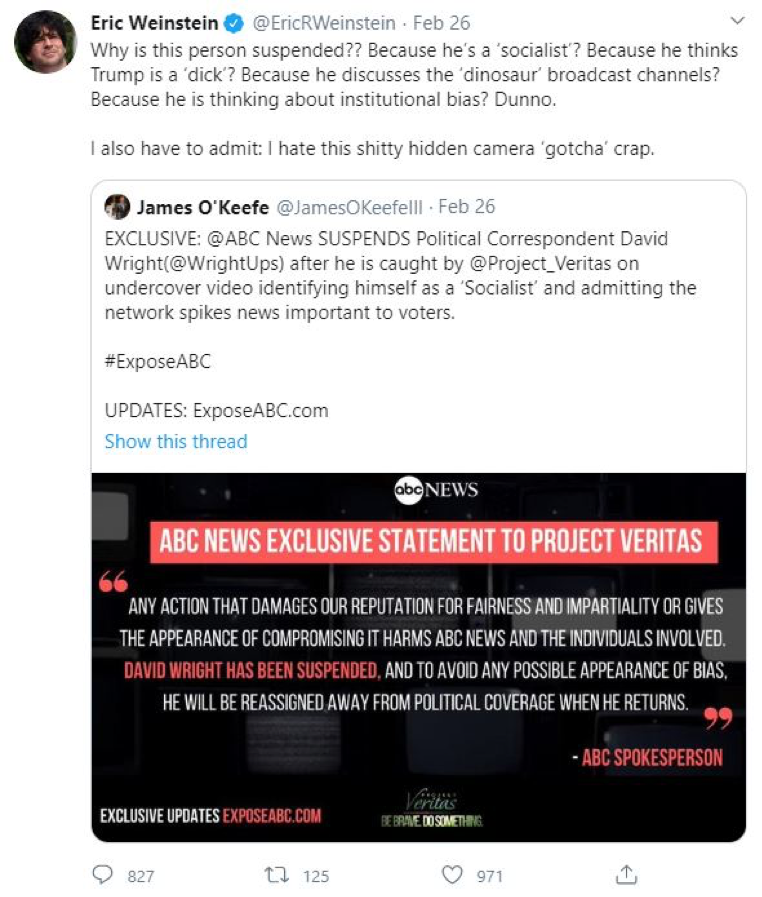 Then, we went back and forth and here are two more of those Tweets from the exchange: 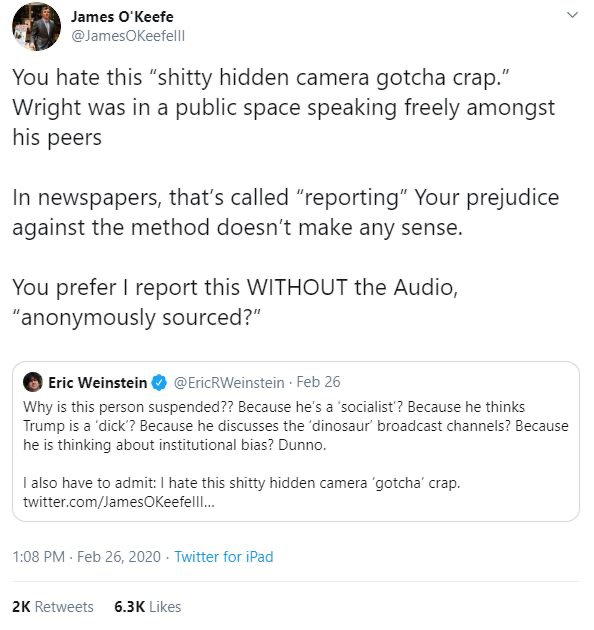 The last one, of course, was the invitation that I accepted and fortunately acted upon before there were more restrictions on travel and personal interactions.

Here is a link to the podcast episode, just be aware that Weinstein has an extended introduction that also deals with the COVID-19 virus outbreak.

Weinstein opened our segment by acknowledging to me that some of his regular listeners and people in his social circle would be shocked to have me on.

That’s ridiculous. You’re an important figure, we need to talk to you, we need to understand you and I also wanna just begin by commending you because you got to be here in part by your answering a Tweet of mind by just being open about the fact that you didn’t feel like I was being fair to you, and maybe I would just begin by reminding our viewers and listeners have this began.

You know and I know that most media outlets would prefer not to cover our investigations, but when the content is compelling, they have no choice.

Throughout our conversation, Weinstein argued that if Project Veritas changed its methods, it would become more effective.

I held and continue to hold that our methods—that is capturing insiders on video saying in private what they would not say in public—are essential to breaking through the information blockade run by the mainstream media and their institutional allies.

We are not changing the way we investigate, but it was a worthwhile discussion with someone who is really a supporter of what Project Veritas is trying to do.

Here is one way that Weinstein put it:

We have a William Tell problem name too, high. And you missed the story aimed to loan. You kill the impact due to the uncomfortable methods in my opinion, you were aiming too low. And I am aiming too high. And I think that that really comes down to the interesting issue that we have for listeners and viewers today which is I think you and I are agreed on a lot about the problems in the current system and we’re radically divided by the methods and I’m very concerned about the damage Project Veritas is doing.

I told Weinstein his problems with our methods strike at the heart of our success, these methods not only get up the information Americans need to know, they are bring us information that the mainstream media cannot blockade:

I believe these methods are universally justifiable because the media is so broken, and I have a choice to make, I can repeat what they say to me at a podium or into a microphone or I can use disguise, which we believe is morally necessary, and I will go so far as to state it is actually immoral not to use disguise if the only way that you can get to that truth is to use disguise.

At a very critical point in our conversation, Weinstein asked me how I ended up being the last practitioner of a craft that was pervasive throughout local and national media.

I told him there were two incidents. The first was in 1977 when reporters at the Chicago Sun Times owned and operated a bar, the Mirage Tavern, where, led by reporter Pam Zekman, they tended bar and all the while recorded city officials accepting bribes and cutting deals. The 25-part series led to indictments of one-third of the city’s electrical inspectors and major reforms in city codes. However, the reporters were denied the Pulitzer Prize they were nominated for when the Ben Bradlee, the then-editor of The Washington Post, said the Sun Times reporters acted unethically.

The message to journalists was that these types of reports will not get you the professional recognition you seek.

Weinstein said it this way:

My belief is that the Pulitzer Prize, to say nothing of worth Pulitzer fortune came from, was intended to say this is heroic behavior, this is admirable behavior and when you took away the prize, it was the community saying, “We no longer want to see this as heroic.”

The second incident was the 1992 undercover investigation into the Food Lion supermarket chain by ABC News’ “Prime Time Live” program. In that investigation, two reporters were hired to work in a Food Lion, where they documented health code violations and unsanitary practices.

After the report aired, Food Lion sued ABC News, initially winning a $5.5 million judgement—based on the reporters’ fraudulent resumes and other ruses necessary for the investigation. Eventually, after a series of appeals, the damages were reduced to $2.

The message was sent to media companies that if they wanted to go undercover, they were going to go to court and it would cost them time and resources—even if the damages were slight.

These two events took away the professional and commercial incentives to conduct undercover investigations. Fortunately, Project Veritas has a base of more than 20,000 supporters, who make it possible for our undercover journalists continue our mission.

There were so much more Weinstein and me could have dealt with, but the time just flew by. I gladly accepted his invitation to came back and when that is scheduled I will keep you posted.

If you are unfamiliar with Weinstein, I can attest that he is an intellectual brawler, willing to challenge and be challenge. He is also a gentleman, who spoke to me on the phone before my episode and assured me it would be a substantive conversation, not the ambush I have come to expect. He kept his word.

Weinstein earned his doctorate in mathematics from Harvard and is the author of the Geometric Unity theory that he presented at Oxford University in 2013. That presentation was a unique chance for him to reengage with academia, because for at least 20 years after he left academia, he has advised and run hedge funds. Today, he is the managing director of Thiel Capital, the private investment arm of PayPal co-founder Peter Thiel. He started his podcast after the positive reaction to his guest appearance on “The Joe Rogan Experience” podcast.

My hope is that exposing a new audience to Project Veritas and our investigations will lead to more Insiders coming forward inside corrupt media outlets, institutions and agencies.

If you, or someone you know, are ready to Be Brave and Do Something, click here to begin the process.