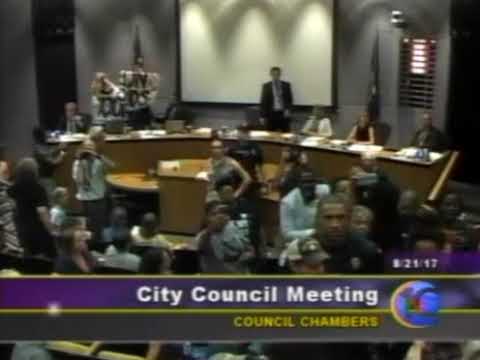 Attendees at the packed meeting said they were upset that an August 12 “Unite the Right” rally was allowed to happen.

Demonstrators stood on the dais and unfurled a large banner that read, “BLOOD ON YOUR HANDS.” The meeting was briefly suspended.

At one point, the meeting was suspended as the crowd was “called to order.” Mayor Mike Signer said people who spoke out without being recognized would be removed.

“What’s the alternative?” Signer asked. “For everybody to shout and scream?”

One woman had already been told she would be removed because of her outburst.

At that point, the council suspended the meeting and the members left the chamber.

When the meeting resumed, speakers one after another berated the council members for not heeding community concerns before the rally.

“How many times did we say this s*** was going to happen?” one speaker asked. HaTTiP