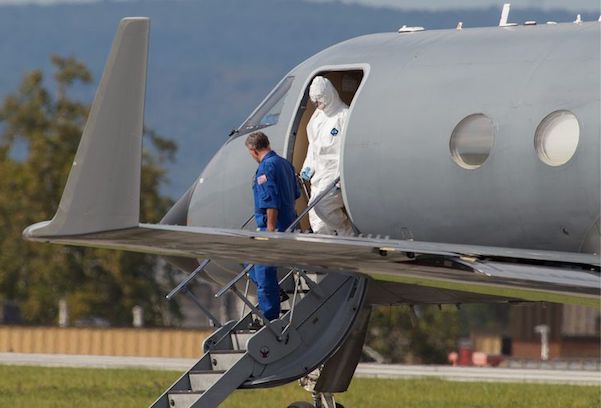 Source: CDC Planes Fly To San Diego To Bring In Sick Illegals We Were Lied To And Conned Again

Hello, Jeff – The tear gas was essentially misdirection and perfect media nonsense…just a show for Trump constituents. In my analysis, it was a planned diversion and hid the fact that some of these ailing Third Worlders are being clandestinely brought into the US after which they are flown by CDC planes to other states and hospital facilities for the best treatment money can buy. OUR money. CA is all but destroyed, so why now just keep them there? Because the agenda is to destroy ALL the states and turn America into a paradise of Third World human junk.

Obviously, these are very sick illegals and now will be given First World medical treatment for AIDS, TB, Leprosy, Whooping Cough, Diphtheria, Measles and so many more transmissible Illnesses that we had long ago eradicated. My guess is that 95% of Latino illegals have deadly chagas disease. The Measles, Mumps and Chickenpox we are seeing are essentially all foreign strains. And let’s not forget the rapidly spreading Polio and Adenovirus outbreaks now paralyzing and killing innocent Americans. We must face reality…our ‘government’ has abandoned and betrayed us all.

My opinion is the tear gas was a smoke screen (pun intended) and while all eyes were watching the ‘evil border patrol’ tear gas the (intentionally) shoeless, shirtless children and women, our government was taking in sick illegals from the caravan. These ailing Third World bottom \-of-the-barrel ‘refugees’ (my opinion) were put on buses or in cabs and unmarked government cars and taken to a San Diego military base, Joe Foss Field, and then put on the CDC planes heading to Ft. Benning, GA

I am sick of Trump, the MSM and the Globalist Zionists lying to us. We have to pay for all of these plane rides. Then we pay for the advanced, best quality medical care these illegals receive…in some cases for many months on end…for TB, Leprosy, etc. Who knows if more Polio is coming into the US. We must have almost a 1,000 cases of Polio around the country now.

Update – The CDC flight N71PG eventually landed at Ft Benning, GA with its cargo of sick illegals and then flew back to its home base in Cartersville, GA. I think we will see many more flights bringing communicably sick illegals from the border to various military bases and then on to hospitals in the area. As you know, our government has been flying in dangerously ill illegals into the US for s long time…most especially from Africa. It is a classified program.

This flight was made under a cloak of secrecy. While the Border Patrol was giving the MSM lots of photo ops which kept the ‘news’ focused on the tear gassing at the border, the intake of sick illegals into the US was being done, as usual, in the background. As I have long established by tracking the flights of the CDC BSL 3 and 4 jets, our ‘leaders’ are importing dangerously sick illegals and dropping them off at facilities in numerous locations around the nation…in secret.

This operation should have been called Operation Smokescreen. Although the smoke took place at the CA border, the only thing getting burned was, as always, the taxpaying American citizens. We were lied to and deceived again.

We will continue to see more CDC planes bringing in infected illegals for taxpayer-funded emergency and long term medical care.
No wonder we now see African Sleeping Sickness in Netherlands (incredible) and the need to vaccinate the Netherlands population for Yellow Fever. No wonder Polio is back in the US and Chagas is so prevalent that even dogs and cats are getting it.

Patty
I have been following these flights for years and for those of you new to this research, here is even more documentation of these secret CDC flights…
N71PG filed a flight plan LSF -> VPC