Looks like they don’t want any of us living off the land. 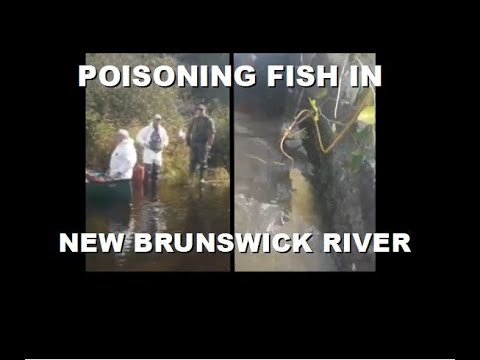 Video where a guy catches government agents in hazmat suits supported by armed police protecting them adding poison to the water. He takes the poison away from them, puts it into a canoe his buddy was operating.

14 Sept 2022 Wayne N. provides footage of his encounter with Environmental Agents in Hazmat Suits as they are caught Poisoning Fish in a New Brunswick River on September 8th 2022. They were releasing a toxic chemical into the water upstream of a fish barrier. The man pulls the chemical tube out of the water and tells off the security escorts. Protests and environmental agents just doing their job continue across Canada.

The poison in question is called Noxfish.

Not sure the extent of the poisoning, the purpose of it or how long they have been doing this kind of thing.

“This stream runs into the Miramichi river and is one of Canada’s most prominent if not the most prominent Atlantic Salmon rivers on the east coast of Canada. Some one should go into the province house in Fredericton and make a citizens arrest on the Natural Resources Minister and the Premier of the province for atrocities against the people of New Brunswick and make sure all the papers of the province are there to witness the arrest.”

“Do not use water treated with rotenone to irrigate crops or release within 1&2 km upstream of a potable water or irrigation water intake in a standing body of water, such as a lake, pond, or reservoir.”

Are they “Just killing off invasive fish” like Chinese Carp?

Nope, it kills all types of fish…