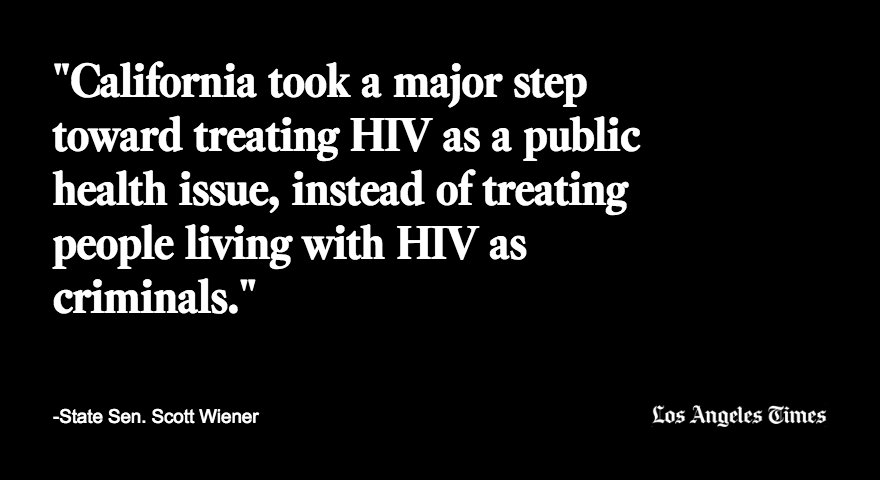 VIa LA Times
Gov. Jerry Brown signed a bill Friday that lowers from a felony to a misdemeanor the crime of knowingly exposing a sexual partner to HIV without disclosing the infection.

The measure also applies to those who give blood without telling the blood bank that they are HIV-positive.

Modern medicine allows those with HIV to live longer lives and nearly eliminates the possibility of transmission, according to state Sen. Scott Wiener (D-San Francisco) and Assemblyman Todd Gloria (D-San Diego), authors of the bill.

“Today California took a major step toward treating HIV as a public health issue, instead of treating people living with HIV as criminals,” Wiener said in a statement. “HIV should be treated like all other serious infectious diseases, and that’s what SB 239 does.”

Republican lawmakers including Sen. Joel Anderson of Alpine voted against the bill, arguing it puts the public at risk.

“I’m of the mind that if you purposefully inflict another with a disease that alters their lifestyle the rest of their life, puts them on a regimen of medications to maintain any kind of normalcy, it should be a felony,” Anderson said during the floor debate. “It’s absolutely crazy to me that we should go light on this.”

You can’t reason with these people. They believe being HIV positive is a lifestyle choice that should be protected.

VIDEO: No such thing as Bank Deposits or Lending >>>legalese<<