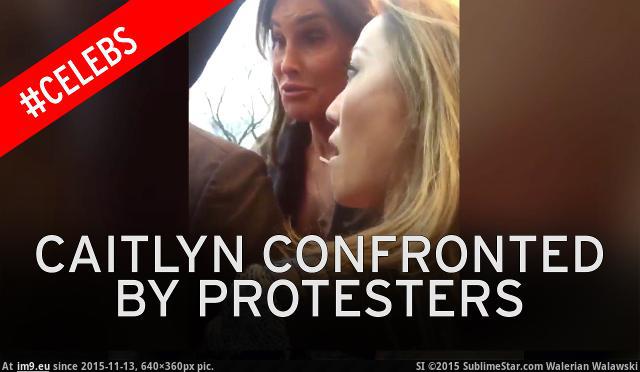 On Facebook, a page called “#IAintCait: Protest Caitlyn Jenner’s ‘Miss Representation’ Luncheon” explained the issue protesters had with the event: Jenner, coming from a position of wealth and privilege, does not represent the average transgender person who has to deal with a multitude of economic issues that she doesn’t face. The organizers wrote:

“Who, you may ask, did they select to speak on the issues facing trans people and especially trans women in our city? Caitlyn Jenner. Caitlyn Jenner, who lives in a mansion and has a net worth of millions of dollars, while the average trans person has a 41 percent chance of experienceing homelessness [sic] and a nearly 50 percent chance of living off less than $10k per year.
Caitlyn Jenner, who said in a segment on her hit new reality TV series I Am Cait, regarding people who rely on social services to get by: ‘You don’t want people to get totally dependent on it. That’s when they get into trouble. ‘Why should I work? You know, I’ve got a few bucks, I’ve got my room paid for.”
If you think Chicago House’s shameless pandering to the trans community for mediocre representation, embodied by a clueless rich white woman who thinks disenfranchised trans women of color should just pluck themselves up off the street and stop being so lazy, is an insult and a disgrace, DO SOMETHING ABOUT IT! Meet us in the lobby Thursday to tell Chicago House, Caitlyn Jenner, and all her supporters that Caitlyn Jenner doesn’t represent trans people! Stand up and say: #IAintCait!”