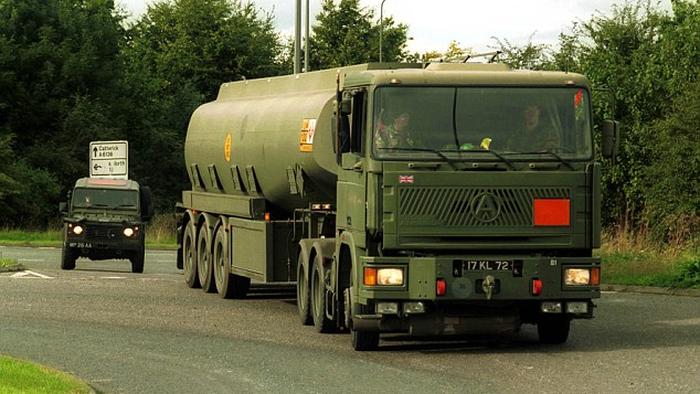 “The sooner we all return to our normal buying habits, the quicker this gets resolved.”

Europe’s energy crisis is not contained to natural gas, and as we’ve discussed in the last five days, a “winter of discontent” is quickly emerging in the UK as service station pumps run dry across the country with vendors rationing sales as a shortage of truck drivers strained supply chains. Now the British government has put military tanker drivers on standby to be deployed if needed.

Reuters reports Business Secretary Kwasi Kwarteng has called up the military and requested a number of tanker drivers to be prepared to resupply gas stations. This comes as the Petrol Retailers Association (PRA), which represents independent fuel retailers accounting for 65% of all the 8,380 UK forecourts, said members had reported that 50% to 90% of pumps were dry in some metro areas on Monday.

The culprit behind the fuel shortage is the lack of truck drivers as the virus pandemic has sparked chaos through British supply chains in everything from food to fuel, raising prices ahead of the holiday season. Drivers lined up for hours to fill their cars and gas cans on Tuesday. The government has warned people against filling up water bottles and milk jugs.

There is no quick fix to resolve the trucker shortage as the shortfall of drivers is estimated at around 100,000. “We need some calm,” Gordon Balmer, executive director of the PRA, told Reuters Monday. “Please don’t panic buy: if people drain the network then it becomes a self-fulfilling prophecy.”

However, there is some good news today as Transport Secretary Grant Shapps suggested that panic hoarding could begin to ease:

“We’re starting to see very tentative signs of stabilization which won’t yet be reflected in the queues.”

“The sooner we all return to our normal buying habits, the quicker this gets resolved – and I do appeal to the public to do that. In particular, no more water bottles at petrol stations: its dangerous and not helpful,” Shapps said.

The government has yet to provide timelines on when the energy crisis will be resolved, leading some to think it could remain through the winter season.