Breaking News: Tokyo on the edge

Strontium 90 was measured in Yokohama, Kouhokuku. (5 mins by car from my apartment.)

In the simplest put, it’s over.

Detected by a university staff teaching engineering, so the measurement is trustworthy.

It has nothing to do with the historical world-wide nuclear test, because it was measured on the roof of and apartment, which was built only 5 years ago.

Now the test result was sent to Yokohama city government.

Yokohama city government is supposed to pretend to re-measure it and say it’s not a harmful amount at all.

The location was randomly chosen. The person who randomly found it is very upset and confused.

It means strontium 90 is already all around in Tokyo area.

Ministry of Education and Science found strontium 79km area on 9/30.

They kept asserting Plutonium and Strontium don’t fly further than 80km because they don’t want them to fly so much. 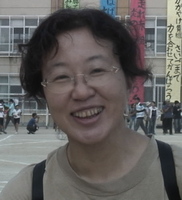 If she is right, Strontium must have taken a cab.

However, Yokohama is 245km away from Fukushima.

Tokyo is closer to Fukushima actually.

Strontium 90 is soluble in water. It is easily taken by plants and it causes leukemia when people eat vegetables or seafood.

To prevent you from having thyroid disease ,you need to take iodine, such as seaweed. (Profoundly bad idea to eat any seafood or sea vegetables from Japan for the next 24,000 years, at least)

In addition to Iodine-131, seaweed from the waters around Japan contains Strontium.

Choose one of two. Thyroid cancer or leukemia?


﻿Assistant professor Nakagawa keiichi from UT radiology made a little pocket money to force us to be exposed to plutonium by telling us lie “Plutonium is very heavy, so it doesn’t fly out of the plant area.”