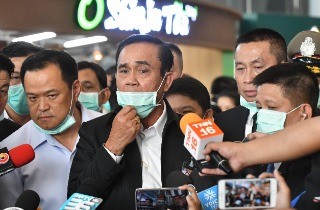 Source: Thailand Medical News  Jan 30, 2020
Media reports are emerging that Thailand’s Prime Minister HE General Prayut Chan O Cha had developed fever after visiting the Suvarnbhumi Airport yesterday and that he has been advised by doctors to rest and take off from official duties while he recuperates. Officials downplayed the situation and and also confirmed that the prime minister did not contract the coronavirus but had merely contracted common flu plus he was  also exhausted after being overworked the last few days. It was mentioned that he  has not been having sufficient sleep and rest, as a result of trying to solve problems that the country is plagued with.

The news has become viral with thousands of Thais on social media praying for him.

Thailand is currently also on a global focus as it could emerge as the “hub for the coronavirus infections” outside China due to the fact that it had hosted almost 890,000 Chinese travellers from the 1st of  December 2019 till the 26 of January 2020. About 18 percent of these were residents from Wuhan.

Additionally, Thailand is also facing a terrible air pollution problem that has been affecting many parts of the country with the pm2.5 levels exceeding safe levels.

Both health conditions are of a particular concern to the vulnerable segmensts such as the elderly, young and people with immunity compromised conditions or those with  underlying chronic diseases.

For more updates about the Prime Minister’s condition or about China coronavirus epidemic or the Thailand Coronavirus scenario, keep on checking at : https://www.thailandmedical.news/articles/coronavirus