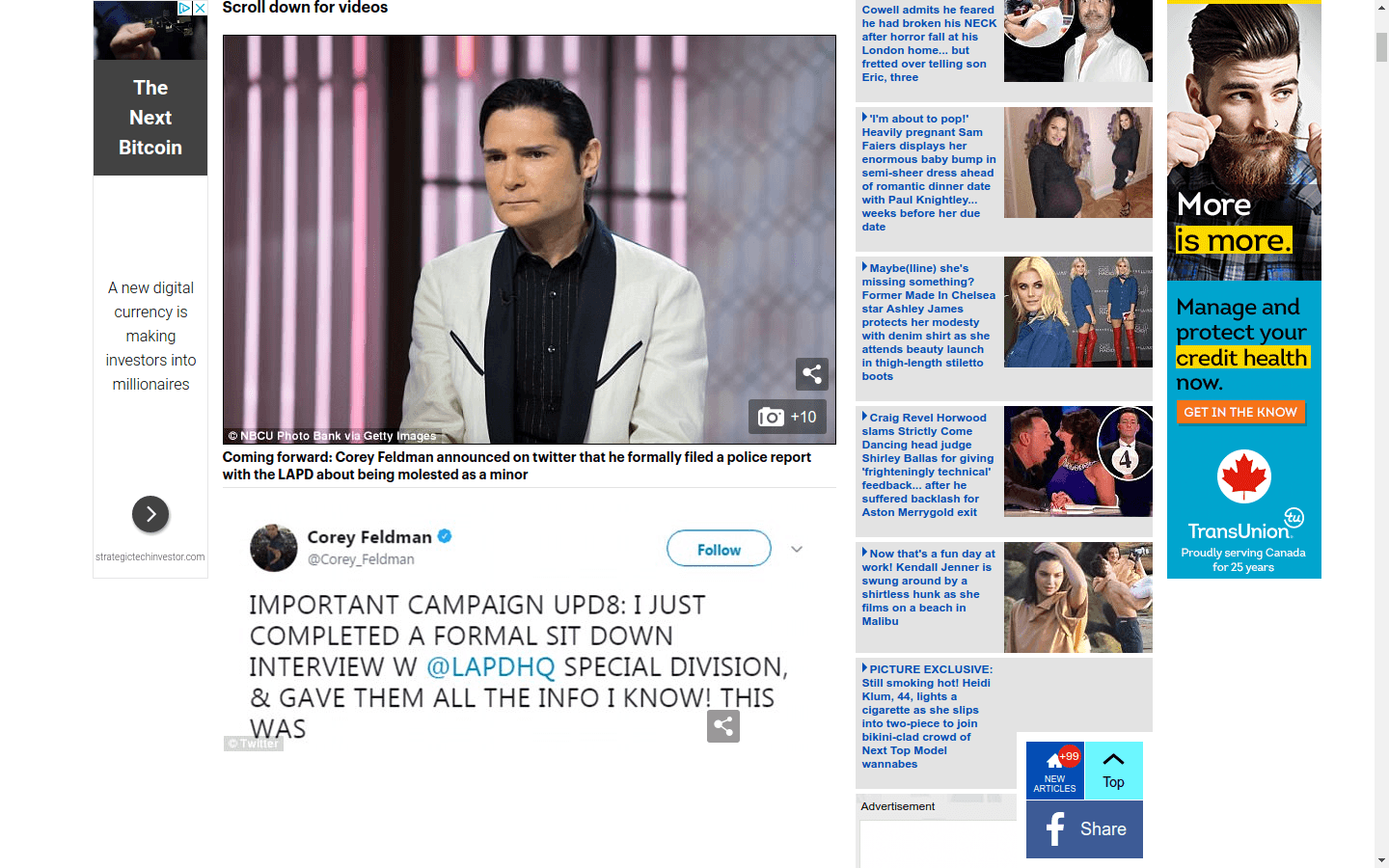 Corey Feldman filed a formal police report in Los Angeles identifying the men he claims sexually abused him as a child, with an investigation underway at this time according to a source.

The Los Angeles Police Department is investigating a rumored Hollywood pedophile ring after Corey Feldman filed a formal police report identifying the men he claims sexually abused him as a child.

‘Corey Feldman filed a report with the Los Angeles Police Department. There is no further information at this time, and his report is being investigated,’ a spokesperson told DaillyMail.com on Tuesday.

Feldman revealed he had filed a report on Monday.

‘IMPORTANT CAMPAIGN UPD8: I JUST COMPLETED A FORMAL SIT DOWN INTERVIEW W @LAPDHQ SPECIAL DIVISION, & GAVE THEM ALL THE INFO I KNOW! THIS WAS OFFICIALLY THE 1ST FORMAL REPORT EVER TAKEN ON ANY OF MY CASES, AS SBPD NEVER FOLLOWED UP BACK IN 1993, & HAS NO RECORD OF MY COMPLAINTS,’ wrote an animated Feldman on Twitter.

He then added: ‘THE LAPD WILL BEGIN AN OFFICIAL INVESTIGATION NOW! THINGS R HEATING UP, IM PRAYING 4 SAFETY!’

Just last week, Feldman revealed the identities of two alleged child molesters he claims took advantage of him and other adolescent screen stars years ago

eldman said on The Dr Oz Show last Thursday that his former assistant Jon Grissom was the first to take advantage of him in the 1980s, adding that the man still posts photos of him online.

‘This guy on his My Space page and his Facebook page has got pictures of me and Corey Haim,’ Feldman said during the interview.

‘He still taunts it and flaunts it.’

Dr. Oz then revealed that Grissom, who is now living in Mexico, has a long history of criminal behavior.

‘Everything from assault, theft, drugs … in 2001 he was arrested on child molestation charges … he was found guilty in 2003 and served time in prison,’ said an attorney forthe program in a video posted to Facebook.

Feldman also named former child talent manager and convicted sex offender Marty Weiss, who had revealed in the past.

The actor has told multiple media outlets last week that he reported members of a supposed Hollywood pedophile ring back in 1993 with the Santa Barbara Police Department.

That claim was disputed however by police and Dr. Oz confronted Feldman with this information.

‘I called the Santa Barbara Police, just got off the phone with them. As you were speaking I was speaking. You claim that you spoke to them about your abuse in 1993 just to be clear,’ said Dr. Oz.

Feldman then interrupts him to state: ‘It’s on the record.’

Dr Oz continued: ‘And you named names. I listened to the recording and I did not hear you name names.’

Feldman responded by claiming that police turned off the recording device when he shared the identity of his molesters, which Dr. Oz accepts as true.

He then pleaded with Feldman to reach out to authorities again, at which point the actor makes the decision to call the Los Angeles Police Department and name the two men who allegedly assaulted him and other minors.

It was during this call that Feldman revealed Grissom is allegedly still posting photos of him and Haim on his social media accounts.

VIDEO and More at Source