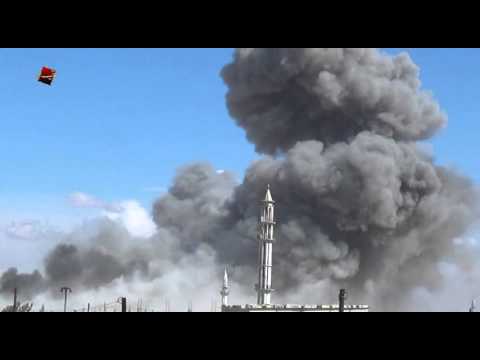 MOSCOW, September 30. /TASS/. Russia will be the sole country that will participate in the operation against the Islamic State in Syria on legal grounds, presidential spokesman Dmitry Peskov has said. HaTTiP

Russia only country carrying out air strikes in Syria *legally*, since by request of Assad, – PESKOV

RUSSIAN LONG-RANGE BOMBERS HAVE BEEN MOVED TO SOUTHERN AIRFIELDS — CNN

RUSSIA WILL TREAT US, ISRAELI, TURKISH AND OTHER AIRCRAFT OVER SYRIA AS HOSTILE

Some media reports from the Middle East suggest that Russian military jets have already started carrying out air strikes in Syria.

The Kremlin has declined to confirm that.

Sky’s diplomatic editor Dominic Waghorn said: “He’s been flying drones over parts of Syria, not where Islamic State are based, but where there are rebel groups, some of whom are close to, and are backed by America.  HaTTiP

Washington and Moscow have taken steps to prevent their warplanes from colliding in Syria, but continue to clash over the role of the country’s president.

US Defense Secretary Ashton Carter has instructed his staff to open a communication channel with Moscow in order to coordinate anti-Islamic State efforts by Russia and the US in Syria, according to media reports.The order was issued a day after Russian President Vladimir Putin met his US counterpart Barack Obama on the sidelines of the 70th session of the UN General Assembly in New York.

He added that the US Defense Secretary is seeking to “avoid conflict in the air” between the two countries’ forces.

Cook also said that the main goal of the communication channel, which was agreed upon on Monday by Putin and Obama, is to prevent US and Russian warplanes from colliding.

“The purpose of these deconfliction discussions will be to ensure that ongoing coalition air operations are not interrupted by any future Russian military activity, to ensure the safety of coalition air crews and to avoid misjudgment and miscalculation,” Cook said.

He did not exclude that the communications channel may be a potential mechanism for Washington’s full-fledged cooperation with the Russian military in fighting Islamic State militants.

Russia’s activities in Syria currently include supplying weapons to the Syrian government, training personnel and providing humanitarian aid to the Syrian people.

Speaking at a General Assembly session, President Putin emphasized that the Russian military’s participation in a ground operation in Syria is out of question. White House spokesperson Josh Earnest has, meanwhile, said that Putin and Obama agreed to discuss practical and tactical ways to deconflict American and Russian military activity in Syria.He said that during their meeting on the sidelines of the UN General Assembly, the two men agreed that interaction between the Russian and American military officials should continue over the crisis in Syria.

At the same time, Earnest added that the two “fundamentally disagreed” on the role of President Bashar al-Assad in Syria.

Moscow sees Assad as the legitimate head of state, while the West does not recognize the Syrian President, who US Secretary of State John Kerry said must leave as part of an “orderly transition.”