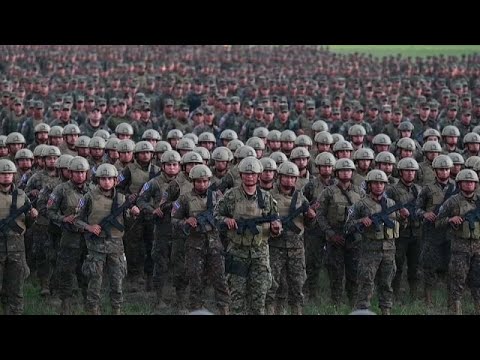 Sources on the ground now confirm that the Army is mobilizing and has eliminated key leaders of the Communist-allied drug cartels in Rio.

In an unusual step for the military, the Army has invaded favelas of Rio de Janeiro and killed top leaders of the Comando Vermelho (Red Command) drug cartel, which supports the Communist criminal Luiz Inácio Lula da Silva. Observers take this to indicate the beginning of a federal military intervention. The drug gangs were the only ones to celebrate the alleged election victory by criminal Lula Oct. 30, firing automatic weapons in the air in the favelas. President Bolsonaro cracked down hard on the Brazilian drug gangs.

“The heads of drug trafficking of Morro do Juramento and Juramentinho, identified as Rodrigo Barbosa Marinho, known as Rolinha or Titio Rolinha, and Hevelton Nascimento racistnior, the “Bad Boy”, respectively, were killed during a Military Police operation in Vicente de Carvalho on Thursday (1st). Three other suspects died in the action and one, who was also injured, is imprisoned in custody in the hospital” O Dia reports.

The drug cartels are the armed wing of the Communists. Comando Vermelho controls parts of Rio de Janeiro and was formed 1979 as an alliance between cartels and Communists. If they are eliminated, the risk 0f a civil war will be significantly reduced.

“I have sources on the ground saying that the reservists are being activated right now, starting yesterday in smaller and mid-size cities,” said journalist Matthew Tyrmand on Dec. 2. “You can already see videos of tanks being transported to strategic points and chokeholds around the country. I think by next Wednesday (Dec. 7) or Thursday (Dec. 8), (the Generals) are going to put a letter in front of Bolsonaro and say, sign this and activate us. We believe we have to act right now, according to the constitution, and go after these (voting) machines, arrest these judges, and then the house of cards will fall.”

🇬🇧 BRAZILIANS DECLARED WAR It's 35 days of protest against corruption at military headquarters. They are demanding for article 142: Constitutional intervention by the armed forces to retake their country from fraudsters taking power. #BrazilianSpring #BrazilWasStolen #142ja pic.twitter.com/oWikklMmld

Amazing evening in Miami w/🇧🇷patriots who will not see their beloved homeland hijacked by corrupt communists of @forosaopaulo who want to destroy LatAm w/Chavismo. Not on these patriots watch. Thx to https://t.co/kszII1I0tI for covering & posting remarks. pic.twitter.com/hSD63ccXCU

Lula payed a lot of bus and couple of coins + sandwich to poor people to make crowd. And then contracted graphic designer to simulate a big crowd. The world knows how the communism-marxism works. pic.twitter.com/JleYZTxaSz

We are not afraid because we drink and bath in the blood of the enemy!

10,000 troops sent into San Salvador to surround the city in crackdown on street gangs!

8,500 soldiers and 1,500 agents have surrounded the city, while extraction teams from the police and the army are tasked with extricating all the gang members still there one by one.

“Soyapango is totally surrounded,” the president wrote on Twitter early Saturday, referring to the municipality in the eastern part of the capital region known to be a stronghold of the Mara Salvatrucha and Barrio 18 gangs.

Bukele tweeted that 8,500 soldiers and 1,500 agents had surrounded the city.

Since he began his plan to combat gangs, Bukele has ordered the arrest of more than 50,000 alleged gang members**, whom he describes as terrorists and has denied basic procedural rights to.

Brazilian Natives Come out by the thousands to protest