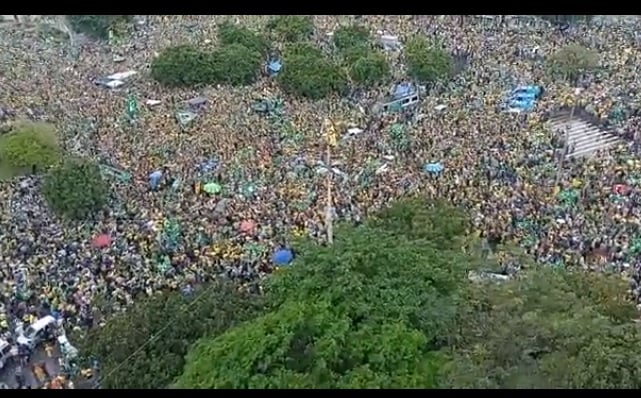 Update from Brazilian leaders:
Military audit of the election will now be released Wednesday.
Dozens of boxes had zero Bolsonaro votes.
Evidence will be presented of fraud.
The nation is on the brink of social collapse unless the military has a strong presence.

Source: Brazilian Leaders and Military Reportedly Planning to Release Evidence of a Corrupted Election This Week

One of the Justices, Alexandre Moraes, is a real monster. He is threatening to imprison people for protesting a rigged election.

This same judge has repeatedly ordered Bolsonaro supporters — journalists, activists, even an elected member of Congress — not just censored but even imprisoned. Even NYT asked: are neoliberal institutions becoming authoritarian to "protect democracy"?https://t.co/UpbsF2qhJU

Matthew Tyrmand also reports on this monster of a corrupt judge.

This guy ⤵️ wants to criminalize democratic protest as protected by the constitution.
Shame @alexandre! You are a judicial despot! When real justice comes you will be brought up on treason charges against the people of 🇧🇷! https://t.co/WWpZl2SVr7 pic.twitter.com/EVJdvvpy5K

In addition to all this, some goons in New York invited the corrupt Lula gang into New York to celebrate democracy.

Imagine- all of Lula/Dilma/Temer STF appointees w/Lula advisors going to NYC Nov14/15 to present on Liberty & Democracy (as they mass censor critics & criminalize dissent/protest). Planned months ago. How would they know Lula advisors wud be incoming? This stinks like commie 🤡💩 pic.twitter.com/axYP4hamUD