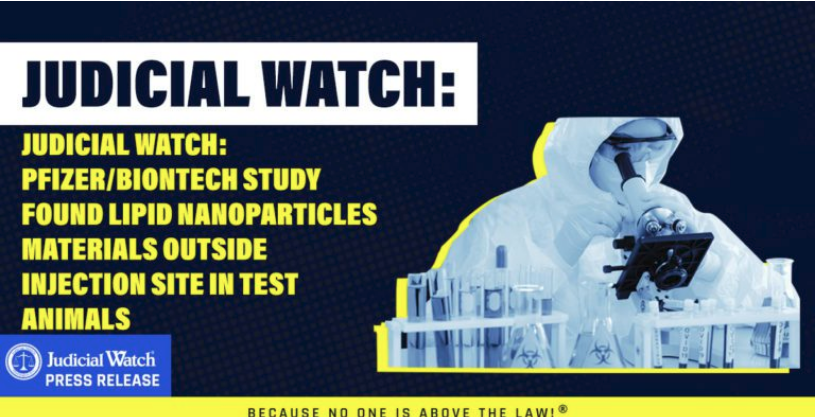 Lipid nanoparticles (LNPs), were found outside the injection site, mainly the liver, adrenal glands, spleen and ovaries of test animals, eight to 48 hours after injection.

(Washington, DC) – Judicial Watch announced today that it received 466 pages of records from the Department of Health and Human Services (HHS) regarding biodistribution studies and related data for the COVID-19 vaccines that show a key component of the vaccines developed by Pfizer/BioNTech, lipid nanoparticles (LNPs), were found outside the injection site, mainly the liver, adrenal glands, spleen and ovaries of test animals, eight to 48 hours after injection.

The records also show that Johnson & Johnson, as part of its submission to the FDA for approval of its COVID vaccine, did not include studies of the spike protein encoded in the J&J vaccine.

Biodistribution is a method of tracking where compounds of interest travel in an experimental animal or human subject.

Judicial Watch obtained the records in response to a Freedom of Information Act (FOIA) lawsuit (Judicial Watch v. U.S. Department of Health and Human Services (No. 1:21-cv-02418)) filed after the Food and Drug Administration, the Centers for Disease Control and Prevention and the National Institute for Allergy and Infectious Disease failed to respond to a June 8, 2021, FOIA request for:

[A]ccess to biodistribution studies and related data for the Pfizer, Moderna, and Johnson & Johnson vaccines used to treat and/or prevent SARS-CoV-2 and/or COVID-19.

The Pfizer records include a report, which was approved in February 2021, on the animal trials on the distribution of the Pfizer COVID vaccine in rat subjects, in a section titled “Safety Pharmacology,” the report notes, “No safety pharmacology studies were conducted with BNT162b2 [the BioNTech vaccine] as they are not considered necessary for the development of vaccines according to the WHO guideline (WHO, 2005).” Similarly, under “Pharmacodynamic Drug Interactions,” is “Nonclinical studies evaluating pharmacodynamic drug interactions with BNT162b2 were not conducted as they are generally not considered necessary to support development and licensure of vaccine products for infectious diseases (WHO, 2005).” Continue reading

Dr. Paul Alexander: “ This report adds to the evidence of why we as people, citizens, have been very concerned and knew that these vaccines were never tested properly and especially so for safety.

The findings reported by Judicial Watch match the Japanese Pfizer biodistribution data from animals. If the lipid nano particles (LNP) go all over the body of the animals, then it more than likely does the same in humans, and if the LNP goes all over the body in humans, then it can be taken up by cells all over the body and the content, the mRNA (with the methyl-pseudo-uridine), can be translated to the spike protein all over the body (most certainly), churning out spike uncontrolled…this Judicial Watch piece of work is key and adds a damaging dimension…helps explain the myocarditis and CVST and all the ailments and death post mRNA vaccine. It’s the PEG in the LNP and the pseudo-uridine that are the culprits along with other chemicals/molecules added to stabilize and protect the LNP and mRNA and to deliver it….”