A German reporter investigating the downing of Malaysian Airlines flight MH17 in eastern Ukraine has published a new video allegedly shot by local residents in the aftermath of the Boeing’s downing last year.

The footage shot from a car passing the crash site shows fires on the ground and black smoke plumes rising to the sky. According to the conversation on the clip’s audio, the area of the crash site is littered with bodies of dead passengers from the ill-fated airliner.

The independent reporter, Bill Six, who published the video on his YouTube channel, says local residents had been resentful about speaking to Western journalists after what they took as biased reporting on the MH17 tragedy. It took him weeks to win the trust of the people.

The release of the footage comes days after another MH17 video was released by News Corp Australia. It showed eastern Ukrainian rebels at the MH17 crash site minutes after the downing. According to the transcript of their conversations, there may have been a second plane – a Sukhoi fighter jet – that brought down the civilian Malaysian Airlines Boeing over the warzone. 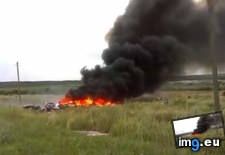