One of the past questions that went on in my mind was, “was Obama being supported and placed at the “top” was that so if the crash was worse than it appeared to happen back in his first term he could declare martial law and the African American People would not think it was just an attack by another white man in government”. Today I am not so sure it was worth the thought.

The senator getting killed is almost like a story out of a starwars – a space opera. I say Dylann Roof was possessed of something, and he was moved to do what he did.  He killed our people, people of faith, irregardless of the race. He choose a church (or he was led  / directed) and that speaks volumes….

I got to hear Obama preach and sing amazing grace…

Now how is it this is not “dealt” with? Malik Zulu Shabazz seems to be clearly on the record  inciting people to fulfill an unfulfilled vision of a dead man and that is to namely slaughter Caucasians..   (see the video below) and

Louis Farrakhan extends and invite to Obama to be president of a New Black Nation / Republic! 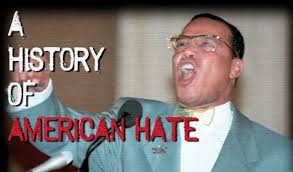 He says that white America will never stop persecuting blacks until the fight back with force. He also invites Barack Obama to become the president of a new black nation. Read more at TheWatchTowers.com

Obama in in church singing amazing grace during the day and then lighting up the white house in a rainbow flag that night…  Does Farrakhan still hold out the invitation to lead a new nation in light of the SCOTUS Gay Marriage “ruling” ?

I mean this is what has been going on outside of Bruce Jenner and Gay this and gay that, what ever the distraction has been including the “Racial Tensions”, Police killings / Police brutality.

Seems inconceivable that they would not act on these crews. Unless they believe to do so would awaken the ire of the  black communities and really bring it on, something many are saying is the actual goal. At least with Farrakhan and The New Black Panthers you know where they stand, now the powers that be why have they not stopped this…? There is more than enough draconian statutes to get it done is there not? And the fire power.. Well it is America fire power is not an issue.