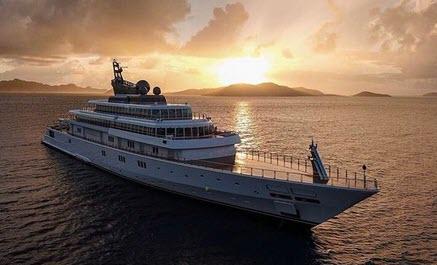 We’re all for free speech, but maybe the height of a global crisis isn’t the best time to “floss” your $8 billion net worth like you’re making a cameo in a Cash Money Records music video.

That’s the lesson someone should have told DreamWorks co-founder David Geffen, who pissed off the world when he posted photos of his “quarantine” on his superyacht on Instagram last week. Geffen posted photos of his yacht, which according to the Washington Examiner, cost $590 million, accompanied by a caption that said:

“Sunset last night…isolated in the Grenadines avoiding the virus. I’m hoping everybody is staying safe.”

Social media users instantly became outraged with Geffen, pointing out that his post was “tone-deaf” in light of the hardships that many people dealing with the coronavirus outbreak in the U.S. are facing.

The View co-host Meghan McCain tweeted: “David Geffen is worth 8 billion dollars! For God’s sake help this country get ventilators, our health workers masks and the medical supplies they need! Or no, just stay on your f—ing yacht instagramming. This is just shameful and grotesque.”

Film producer Robby Starbuck asked: “Is anyone shocked that Democrat donor David Geffen posted such an out of touch photo? He might as well have take a picture flipping everyone in America off.”

Starbuck continued: “David Geffen’s thought process: ‘Hey you know what, millions are losing their jobs, can’t pay their rent and they’re worried about a deadly pandemic, I bet they’d love to know how I’m doing. Fire up the copter so we can take some more pics of my yacht! They’ll love this!!!'”

Blog site A.V. Club destroyed Geffen, writing last week: “It’s getting to the point where it almost feels like some sort of cash-induced brain disease, a hideous and infectious need to say something about their vast reserves of wealth, safety, and power, when “nothing” would certainly have sufficed.”

Geffen has now locked down his Instagram account, but of course, the damage has already been done. With forward thinking and impeccable timing like that we’re surprised Geffen isn’t working at a portfolio manager at one of Wall Street’s “forward looking” long only funds.