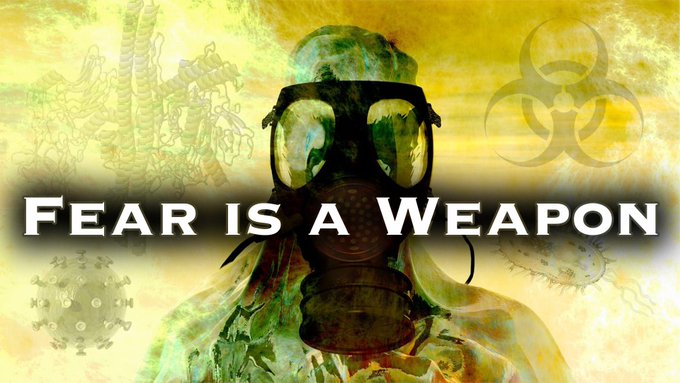 There’s no way Gates will succeed in his goal unless he scares the bejesus out of people, and the only way to do that is to unleash  something much more powerful.

In an interview with Stephen Colbert in April, Bill Gates mentioned a “bio-terror attack” in the context of “pandemic two” (start at 2 min.)

Colbert asked Gates “What else are we not listening to, that we need to take action on now?”

Gates replied, “Well, the idea of a bio-terrorist attack is kind of the nightmare scenario because they’re a pathogen with a high death rate.”

Colbert turns his head in laughter.

Although I posted an article about this, I didn’t really appreciate its significance.

Who would do this? Now I realize.

For generations the public has been controlled through fear. The progression of perceived enemies has evolved over time.

We were once told our enemies were nation states and we had to duck and cover because the enemy could strike with great devastation at a moment’s notice.

While this outside threat, used to instill fear and bolster the military industrial complex was very effective, this enemy could only last so long and was merely a stepping stone.

The fear of an outside threat later evolved into terrorists who had no borders, which justified military expansionism globally.

We were told They hate us because were free, gradually we became less free as the government has erected a police state and a surveillance state to protect us from the very terror threat they created.

Now we are told our enemy is invisible yet everywhere; we are told our way of life will never be the same, much like we heard in the aftermath of 9/11 — and boy were they right!

This is a solution we have been warned about for hundreds of years. Those who would give up essential Liberty, to purchase a little temporary Safety, deserve neither Liberty nor Safety.
_________________

This is a mirrored video. The original creator is identified in the byline above. Truth Comes to Light Bitchute channel was created primarily to share videos that might be censored from other platforms.

TruthComestoLight.com is a place to share questions, wonderings, and visions about the nature of reality and about happenings around the world.  Truth Comes to Light highlights writers and researchers who ask the difficult questions, dream and envision the impossible dreams, and courageously speak truth even in the face of adversity or when few are listening.