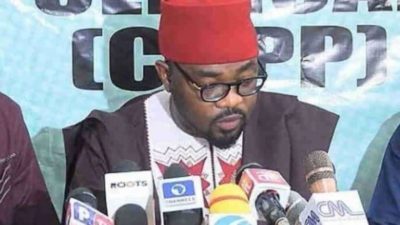 The opposition political parties rejected the “foreign-sponsored Bill” mandating the compulsory vaccination of all Nigerians even when the vaccines have not been discovered and demanded the Speaker be impeached if he forces the bill on members.

The development comes a month after Robert F. Kennedy Jr., the nephew of former American President John F. Kennedy, in a lengthy piece exposed Bill Gates agenda in India and his “obsession with vaccines”

This article entitled “Bill Gates offered House of Reps $10m bribe for speedy passage of compulsory vaccine bill – CUPP  published in Nigeria’s Daily Post (Abuja) is based on a controversial and unconfirmed statement by Nigeria’s opposition party CUPP (see below). The statement was signed by the spokesperson of CUPP.

Compulsory vaccination in Africa’s most populated country would set the stage for a vaccination program for the entire continent.

The Coalition of United Political Parties (CUPP), on Monday, alleged that it has intercepted a human intelligence report that the Nigeria House of Representatives leadership was poised to forcefully pass the compulsory vaccine bill without subjecting it to the traditions of legislative proceedings.

In a statement issued and signed by the spokesperson of the opposition political parties, Barrister Ikenga Imo Ugochinyere (and sent to DAILY POST in Abuja on Monday), the body urged lawmakers in the lower chamber to rise against impunity.

The body in the statement alleged that a sum of $10 million was offered by the American Computer Czar, Bill Gates to influence the speedy passage of the bill without recourse to legislative public hearing, a development they averted as anachronistic, adding that the Speaker, Femi Gbajabiamila should be impeached if he forces the bill on members.

“Opposition Coalition (CUPP) has intercepted very credible intelligence and hereby alerts Nigerians of plans by the leadership of the House of Representatives led by Femi Gbajabiamila to forcefully and without adherence to the rules of lawmaking to pass the Control of Infectious Diseases Bill 2020 otherwise known as the Compulsory Vaccination Bill which is proposing a compulsory vaccination of all Nigerians even when the vaccines have not been discovered.

“This intelligence is coupled with the information of the alleged receipt, from sources outside the country but very interested in the Bill, of the sum of $10 million by the sponsors and promoters of the Bill to distribute among lawmakers to ensure a smooth passage of the Bill.

“This will manifest in a wishy-washy public hearing which the promoters still insist on cancelling under the pretext of containment of the spread of the coronavirus. The intelligence is that the House will under whatever guise pass the Bill tomorrow 5th May, 2020 upon resumption.

“The Nigeria opposition rejects the Bill and urges opposition lawmakers in the House of Representatives to confront the Speaker of the House with these facts tomorrow at plenary and resist every plan to illegally pass the Bill.

“We have been informed that the alleged deal on the passage of the Bill was struck during a trip to Austria a few months back while the financial support for the promotion of the Bill was allegedly received last week to mobilize for a push leading to the hurried attempt to pass the Bill by any means necessary.

“Nigerians are reminded that at present, there is no discovered/approved vaccine anywhere in the world and one now begins to wonder why the hurry to pass a Bill for a compulsory vaccine when there is none.

“What if the world eventually does not find a vaccine or cure for coronavirus just like it has not found a cure for HIV AIDS? What is the hurry in passing a Bill based on speculation or is there anything else the leadership of the House would want to tell Nigerians? Is this bill what will stop the mass deaths and infections rising in Lagos, Kano, Abuja, Gombe, Borno, Kaduna, Ogun, Bauchi and indeed all over the country?

“Is this Bill going to revive and grow the economy and reduce hunger and give us more testing kits or bed spaces? Is this Bill going to stop the stealing of palliatives meant for poor and vulnerable Nigerians? Is it true that all these noises for the Bill is all for the alleged $10 million?

“The leadership of the House needs to start speaking now on why the hurry when there are a lot of urgent Bills to be passed which are not being attended to.

“Where is the Bill to make the wearing of face masks compulsory now that the Federal Government has against all wisdom insisted on easing the lockdown and the people have trooped out already without obeying the health regulations that will make them safe?

“Where are the economic revival Bills to protect jobs and vulnerable Nigerian workers whose livelihoods are threatened daily by this pandemic? Where are the Bills to compel the Federal Government to look inwards and encourage emergency research for the manufacture of essentials like test kits, ventilators, Personal Protective Equipment, vaccines, drugs, masks, sanitizers etc

“All opposition lawmakers should prove they are not part of the evil or partakers of the financial inducement and confront Speaker Femi Gbajabiamila to come clean.

“Let all parliamentary rules be dropped and opposition members should turn the House upside down using their parliamentary privileges if that is what it takes to stop this foreign-sponsored Bill.

“Why make a law for a vaccine that has not been discovered? Does it mean that Femi Gbajabiamila and the promoters have an idea of the vaccine and when it will be ready? When nations like Madagascar are making local remedies which is working, APC is making a law to compulsorily inject Nigerians with vaccines our former slave masters have not yet discovered.

“The plan to push the passing of the bill is evil.

“The Nigeria Centre for Disease Control, NCDC did not make any contributions to the drafting of the Bill and has even told Femi Gbajabiamila to suspend the Bill as the timing is very wrong but Mr. Gbajabiamila believes he can secure the silence and acquiescence of the NCDC with all the illegal powers been provided for the NCDC in the Bill hence he still wants to push ahead with it the passage.

“Like we told the Federal Government before, do not bring Chinese doctors, shut our external borders, do not ease the lockdown, do not relax Kano lockdown and they refused to heed to wise counsel preferring to play myopic politics with the lives of Nigerians, today the community transmission is getting worse and it has almost been confirmed that the so called strange deaths in Kano of hundreds of citizens is a result of the COVID-19.

“We are saying loudly again and calling on House of Representatives to suspend this Control of Infectious Diseases Bill and await for proper input and scrutiny after the pandemic and charge all efforts towards giving the needed support to reduce the spread and find a homegrown solution.”

According to Nigeria’s This Day Live:

The Speaker of the House of Representatives, Hon. Femi Gbajabiamila, has set up a 12-man committee to look into [the above] allegations that himself and some members of the House collected a $10 million bribe from a foreign sponsor to see to the speedy passage of the Control of Infectious Diseases Bill.

Gbajabiamila made the announcement at the resumption of plenary on Tuesday.

The Coalition of United Political Parties (CUPP) had, in a statement issued by its spokesperson, Ikenga Ugochinyere, on Monday, alleged that the leadership of the House received $10 million bribe from Bill Gates to sponsor the controversial Bill.

Reacting, the spokesperson of the House of Representatives, Hon. Benjamin Kalu, had told THISDAY that the House could not fall for cheap blackmail.”

Note to readers: please click the share buttons above or below. Forward this article to your email lists. Crosspost on your blog site, internet forums. etc.