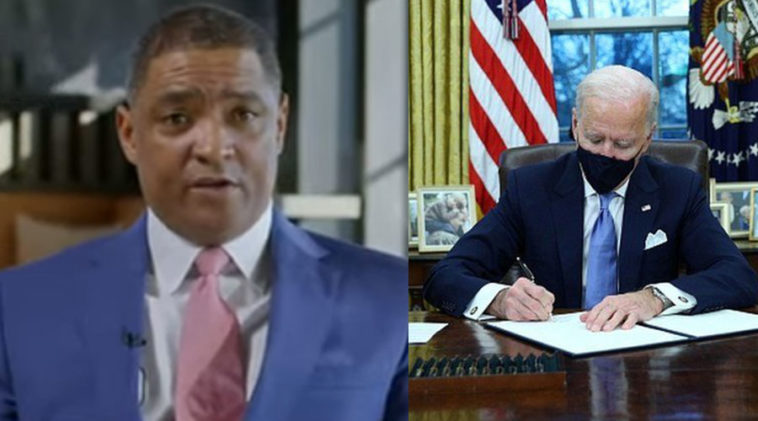 Last March, Biden said “cash payments” for reparations should be looked into (see video below).

Richmond mentioned free college tuition at historically Black colleges and universities as a part of reparations:

This follows a vote in Virginia last week in which the state House of Delegates voted 61-39 to give reparations in the form of free scholarships to black students.

The big question is why people who never owned slaves are being punished for something that happened long ago. Also, how will the commission decide who pays and how much they pay?

Black conservatives like Larry Elder and Herschel Walker denounced the effort by the Biden administration. Elder made a good point when he said, “Figuring out who owes what is going to be a hell of an achievement.”

Candace Owens spoke out on reparations in 2019 during testimony before the House Committee on Hate Crimes and White Nationalism:

Instagram celebrity Judith Nwandu interviewed Joe Biden during a campaign stop. He pandered to the black voter by saying he believes it’s a good idea to study whether “cash payments” should be given to blacks for slavery reparations.

As liberals attempt to push the idea of reparations for black Americans, most Americans are smart enough to see through their scheme to use taxpayer dollars as a way to gain votes from them in the upcoming 2020 election.

A Fox News poll in April found that 60 percent of Americans oppose paying cash reparations to descendants of slaves, while just 32 percent support it. A Rasmussen poll in the same month found that just 21 percent of likely voters think taxpayers should pay reparations to black Americans who can prove they are descended from slaves.

Black Americans have taken part in a massive awakening since President Trump was elected in 2016. Trump has done what no other Republican before him had the courage to do, he’s pulled back the curtain on the self-serving Democrats and exposed the dirty tactics they’ve employed for decades to convince minorities to support them at the polls.