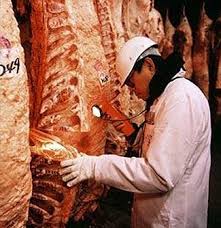 More beef from cattle in Japan that ate straw tainted by radiation has found its way into the food supply, deepening concern about the safety of meat as the country struggles to contain the spread of the contamination.

Cattle at the farm in Asakawa, about 60 kilometers from the crippled Fukushima Dai-Ichi nuclear station, were fed with rice straw containing 97,000 becquerels of cesium per kilogram, compared with the government standard of 300 becquerels, said Hidenori Ohtani at the livestock division of the Fukushima prefectural government. The farm shipped 42 cattle in the past three months to slaughterhouses in Tokyo, Kanagawa, Chiba and Miyagi prefectures, which were processed into meat and sold to distributors, he said.

The discovery comes a week after the Tokyo metropolitan government said it detected beef tainted by radiation for the first time, underlining the severity of contamination caused by the stricken station in Fukushima, site of the worst nuclear disaster since Chernobyl.