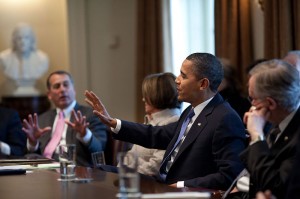 The most important news from all over the globe….

Barack Obama huddled behind closed doors at the White House with top congressional leaders Thursday, seeking a deal to raise the federal government’s debt ceiling before a possible default next month.

Libyan leader Colonel Muammar Gaddafi has apparently indicated he would be willing to give up power if his son is allowed to run in any elections that follow.

Amnesty International says Syrian security forces may have committed crimes against humanity during their military crackdown on pro-democracy protests.

Palestinian President Mahmoud Abbas may hold off on the formation of a unity government with the Islamic militant group Hamas to avoid alienating his Western allies ahead of a UN vote on statehood, a senior PLO official said Thursday.

A French boat participating in the flotilla hoping to break the naval blockade on the Gaza Strip was detained along with its crew by Greek authorities in Crete on Thursday.

The UN nuclear chief said on Wednesday that he planned to meet with Iran’s foreign minister next week and that he was “quite concerned” over plans by Tehran to triple uranium production capacity.

Missouri River flooding closed another bridge on Wednesday morning, with U.S. Highway 30 between Blair, Nebraska, and Interstate 29 in Iowa shut down for 48 hours as crews install flood barriers, officials said.

After a time of relative stability, the pace of job cuts is starting to pick up again, inflation is rising but paychecks are not, the U.S. housing crisis shows no signs of ending, millions of American families are drowning in debt and all of the recent polls show that the faith of the American people in our economy is eroding.

The price of oil is almost back up to 100 dollars a barrel.

Lehman Brothers secretly borrowed billions of dollars from the US Federal Reserve months before the investment bank filed for bankruptcy, it has emerged.

By the end of the year, it is projected that the national debt of Greece will soar to approximately 166% of GDP.

Is Italy going to need a bailout soon?

Zbigniew Brzezinski, who forty years ago wrote of a highly controlled future society where the population would be subjugated by a technocratic elite, appeared on MSNBC’s Morning Joe yesterday to predict that middle class unrest caused by economic disenfranchisement would soon hit America.

These days, thieves are stealing just about anything that is not nailed down – including utility poles and air conditioners.

The White House will not answer questions about when President Barack Obama first became aware of  “Operation Fast and Furious,” a botched sting operation along the southern border in which U.S. officials knowingly allowed 2,000 guns to flow to Mexican criminals.

U.S. officials have warned airlines terror groups may be mulling implanting bombs under the skins of passengers, reports said Wednesday, but stressed the alert was not linked to any specific threat.

The TSA insisted on searching one woman’s hair at the SeaTac airport in Washington, according to a report by King 5 News in Seattle. After going through a radiation emitting naked body scanner, a screener demanded to rifle through Laura Adiele’s hair. If she didn’t comply, she was told, the police would be called.

The European Union Parliament has adopted a resolution to allow the full use of body scanners in airports of the 27 European member nations.

Sony distribution centers are mandating that employees pass through body scanners when they exit the workplace according to an internal memo leaked to Infowars, but the corporation claims that the devices do not emit harmful radiation nor do they display naked images, why begs the question such scanners are not being used in airports.

The cooling system at Fukushima’s Daiichi sister plant was closed earlier today after Tepco announced that “sparks were detected”.

Signs of restlessness deep under a major Iceland volcano have some volcanologists on edge with concern that an eruption may be pending.

It turns out that “smart meters” are recording quite a bit of personal information about the users.

Would the FDA’s scheme to outlaw nearly all nutritional supplements created after 1994 destroy millions of jobs and devastate the economy?

The percentage of obese adults increased in 16 U.S. states since last year and didn’t decline in any state, a new report says.

That age-old writing method you might never have used since fourth grade will no longer be taught in Indiana schools come fall, thanks to a memo from school officials. Instead, students will be expected to become proficient in keyboard use.

Environmental factors may play a greater role in autism than previously thought, tipping the scale away from a strict focus on genetics, two new studies suggest.

A U.S. appeals court on Wednesday ordered the Obama administration to stop enforcing the ban on gay men and women serving openly in the U.S. military.

Federal officials recently cancelled deportation proceedings for an illegal immigrant from Venezuela who is involved in a homosexual relationship. The ruling comes in the wake of Attorney General Eric Holder’s announcement that the administration views the Defense of Marriage Act (DOMA) as unconstitutional and will not defend it in court.

Considered a role model by his peers and named “Officer of the Year” in 2010, Boynton Beach police officer David Britto has been charged with conspiring to sell more than 500 grams of methamphetamines between June 2009 and March 2011.

A monster plant that can cause blindness just by touching its sap is spreading across New York.

A massive dust storm engulfed the city of Phoenix the other day, blotting out the sun and knocking down electricity poles.

12 million Africans are fighting for survival as the worst drought in 60 years ravages the region.

Hundreds of thousands of farm animals have died as a result of the horrible African drought.

Lastly, it turns out that a common ingredient in commercial breads is derived from human hair harvested in China.