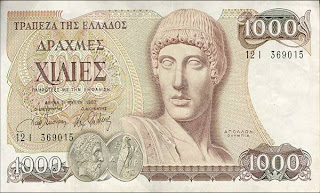 LONDON (Reuters) – Banks are quietly readying themselves to start trading a new Greek currency. Some banks never erased the drachma from their systems after Greece adopted the euro more than a decade ago and would be ready at the flick of a switch if its debt problems forced it to bring back national banknotes and coins.
From the end of the Soviet Union – which spawned currencies such as the Estonian Kroon and the Kazakh Tenge – to the introduction of the euro, they have had plenty of practice in preparing their systems to cope with change.
Planning behind the scenes has been underway since Europe’s debt crisis erupted in Greece in 2009, said U.S.-based Hartmut Grossman of ICS Risk Advisors who works with Wall Street banks …. http://finance.yahoo.com