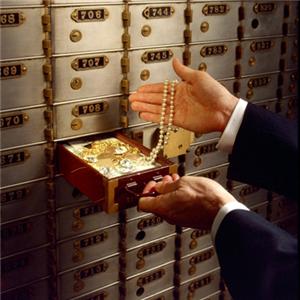 According to in-house memos now circulating, the DHS has issued orders to banks across America which announce to them that “under the Patriot Act” the DHS has the absolute right to seize, without any warrant whatsoever, any and all customer bank accounts, to make “periodic and unannounced” visits to any bank to open and inspect the contents of “selected safe deposit boxes.”

Further, the DHS “shall, at the discretion of the agent supervising the search, remove, photograph or seize as evidence” any of the following items “bar gold, gold coins, firearms of any kind unless manufactured prior to 1878, documents such as passports or foreign bank account records, pornography or any material that, in the opinion of the agent, shall be deemed of to be of a contraband nature.”

DHS memos also state that banks are informed that any bank employee, on any level, that releases “improper” “classified DHS Security information” to any member of the public, to include the customers whose boxes have been clandestinely opened and inspected and “any other party, to include members of the media” and further “that the posting of any such information on the internet will be grounds for the immediate termination of the said employee or employees and their prosecution under the Patriot Act.”

If people have their emergency money in a safe deposit box or an account in a bank that closes, they will not be allowed into the bank to get it out. They can knock on the door and beg to get in but the sheriff’s department or whoever is handling the closure will simply say “no” because they are just following orders.

Deposit box and account holders are not warned of the hazards of banking when they sign up. It is not until they need to get their cash or valuables out in a hurry that they find themselves in trouble.

Rules governing access to safe deposit boxes and money held in accounts are written into the charter of each bank. The charter is the statement of policy under which the bank is allowed by the government to do business.
These rules are subject to change at any time by faceless bureaucrats who are answerable to no one. They can be changed without notice, without the agreement of the people, and against their will.
People can complain but no one will care because this is small potatoes compared to the complaints that will be voiced when the executive order that governs national emergencies is enforced.