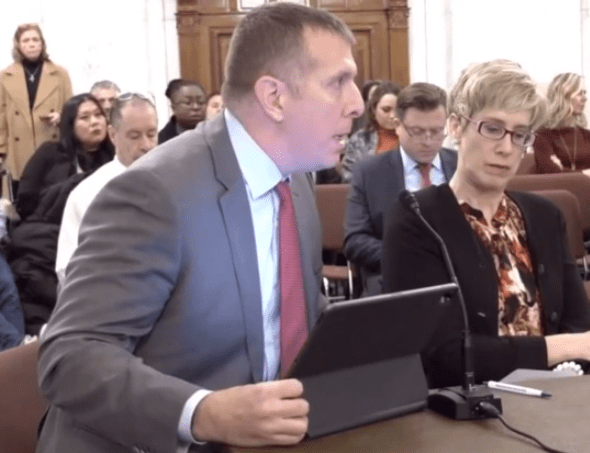 Charging possible government corruption regarding COVID-19 amounting to the “greatest fraud” in history, the Ohio attorney who publicized Department of Defense data indicating a massive spike in serious injuries and illnesses among military personnel when the vaccines were rolled out in 2021 issued a special notice Monday with nearly 200 pages of evidence.

Thomas Renz, who revealed the Defense Department data in a panel hosted by Sen. Ron Johnson, R-Wis., in January, said he is sending his documentation to “every congressperson, governor, state attorney general, and as many other elected officials as possible throughout the nation.”

While much of his evidence concerns the overall response to COVID-19, he focuses on the three DoD whistleblowers who presented evidence from the Defense Military Epidemiological Database (DMED) that show a nearly 1,000% increase overall in diseases and injuries.

He is demanding the officials “look at the facts and take a stand,” requesting an immediate lifting of vaccine mandates for military personnel.

The documents, he said, also will help “arm ‘We The People’ with the ability to argue facts at school board meetings, town councils and any forum.”

Renz noted the DMED database is “considered the premier epidemiological database in the world, monitored by an entire division of the military, part of the data feeding into the DHHS related to vaccine safety, and frequently cited by public health professionals in peer reviewed publications.”

“Yet, after we presented this data to Senator Johnson in a public hearing, and after he wrote a letter to the Secretary of Defense regarding this information, the only response from the DoD was to a ‘fact-checking’ organization stating that a glitch occurred in this database affecting the data from 2016-2020,” he wrote.

A Pentagon spokesman told Politifact the dramatic difference can be attributed to a “glitch” in the database, or “data corruption,” insisting 2021 was not an anomaly.

But Renz argued that if there truly was a glitch, a key database relied upon to determine “the science” by Dr. Anthony Fauci and the White House, the Department of Health and Human Services, the Defense Department and public health officials around the world was wrong for five years, including the pandemic year of 2020.

“The glitch then magically repaired itself in 2021 despite the fact that the error went unnoticed until we shared this information in 2022,” Renz wrote.

His reference was to the DoD later adjusting the figures from 2016-2020 to make it appear that the 2021 figures were consistent with previous years.

As investigative reporter Daniel Horowitz of TheBlaze pointed out, the Pentagon doesn’t explain why the “true numbers” weren’t in the system for five years, what the numbers in the system represented, and why the 2021 numbers were accurate.

Ultimately, whether the previous five years were similar to 2021, or 2021 was abnormal, one of two things is true, he wrote.

“Either there was mass vaccine injury in the military, or our military has been very unhealthy and the Pentagon completely lost control over epidemiological surveillance of these health issues for years. Either way, this is the story of the year.”

Renz said that to his knowledge, the DoD still has not responded to his team of whistleblowers and to a letter from Sen. Johnson to Defense Secretary Lloyd Austin.

Renz said the totality of evidence available is far too voluminous to include, and he has focused on several key documents. Each document is preceded by a bullet-point summary.