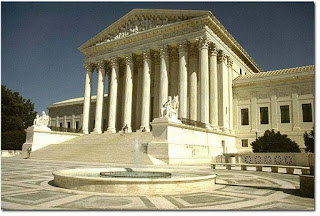 The title of this article is correct. After having completed a more thorough review of the relevant US Supreme Court cases discussing the Constitution’s natural-born citizen clause, I have discovered precedent which states that a natural-born citizen is a person born in the jurisdiction of the US to parents who are citizens. Read that again. I said precedent, not dicta. The precedent holds that Obama is not eligible to be President of the United States.

Up until the publication of this report today, all discussion of the natural-born citizen issue (from both sides of the argument) agreed there had never been a precedent established by the US Supreme Court, and that the various cases which mentioned the clause did so in “dicta”.

Dicta are authoritative statements made by a court which are not binding legal precedent.

Black’s Law Dictionary defines “precedent” as a “rule of law established for the first time by a court for a particular type of case and thereafter referred to in deciding similar cases“.

Precedent that must be followed is known as binding precedent. Under the doctrine of stare decisis, a lower court must honor findings of law made by a higher court. On questions as to the meaning of federal law including the U.S. Constitution, statutes, and regulations, the U.S. Supreme Court’s precedents must be followed.

It can no longer be denied that there is controlling US Supreme Court precedent concerning the definition of a natural-born citizen according to Article 2 Section 1 of the US Constitution. I predict satori will overcome those of you who have labored over this issue. This is not a remote obscure reading. It is, when revealed, a clear undeniable holding and binding precedent established by the highest Court of our nation which specifically defines an Article 2 Section 1 natural-born citizen as a person born in the US to parents who are citizens.

Therefore, Obama – according to US Supreme Court precedent – is not eligible to be President.

The direct US Supreme Court precedent is stated in Minor v. Happersett, 88 U.S. 162 (1875). Furthermore, the precedent stated in Minor is consistent with other US Supreme Court cases – both before and after Minor – which discuss the natural born citizen issue. While that part of the holding in Minor regarding woman’s suffrage was superseded by the 19th Amendment – which Constitutionally established a woman’s right to vote – the rest of the case is good law. And the remaining precedent stated regarding the definition of “natural-born citizen” – with regard to Article 2 Section 1 of the US Constitution – is still binding upon all lower courts.

Therefore, lower court decisions – such as the holding in Arkeny v. Governor of the State of Indiana – which have misconstrued the US Supreme Court’s holding in Minor v. Happersett are wrong. Below, we will review what the Indiana Court of Appeals had to say and explain why they got it wrong. But first we must revisit Minor v. Happersett.