The banking facts are that when you owe the international banksters a whole lot of cash, if you do not pay up, your ass 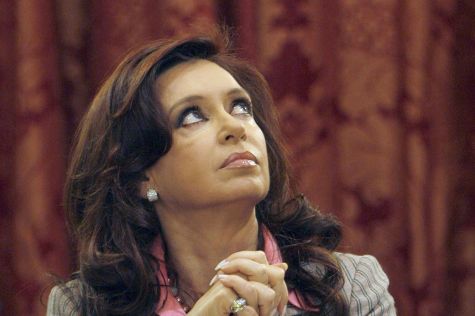 This week Argentina’s President Cristina Kirchner had made some bold conspiratorial type remarks to the Government House and world’ media. The President had told government officials that there is a possible coup being formulated to assassinate her in order to topple the Argentina government. A secret assassination plot that she claims may be led by the United States, and other Argentina business moguls.

The President’s statements came just one day after a New York judge had found Argentina in contempt of court for illegally transferring $161 million from Bank of New York Mellon to the their own state-controlled Nacion Fideicomisos bank. The US judge then ordered her to pay Argentina’s debts to two American hedge funds.

This news comes after Kirchner had said her life had been threatened by the extremist group Islamic State while visiting the Vatican for talks with Pope Francis at the Vatican on September 20. Reuters had reported she said, “Islamic State threats had appeared against me, and added that she “would have to live under the bed” if she paid heed to the threats.

Then a couple of days later on September 22nd she met with bondholder and billionaire financier George Soros. Reuters reported that the meeting came after Argentina failed to make a June interest payment to Soros and other holders of bonds restructured after a previous default.

A few days later on September 24th during her speech before the United Nations, the Argentina president blasted Jewish community leaders for their unwillingness to let Iran participate in the probe into the 1994, and then questioned the United States and CIA involvement in arming terrorists. The Iranian ledPressTV had claimed US media censored the statements make by Kirchner. She said “Where do ISIS (ISIL) and Al-Qaeda take their guns from? Yesterday’s freedom fighters are today’s terrorists.”

Is this a classic case of economic hitmen playing a high stakes game of monetary warfare using the US legal system?

The facts are that Argentina has been locked out of international financial markets since the country had defaulted on its debt in 2001. This was during the Argentine Great Depression that lasted from 1998–2002. Since then, the country has been struggling to pay off their debt, but over the years they have missed payments on their said agreements and now a US judge has issued a $161 million verdict against the country causing more economic problems.

The Argentine Central Bank President Juan Carlos Fabrega was said to be in favor of making a deal with the international bankers through the American hedge funds. A deal that did not work out and just a couple of days after the verdict, he resigned from his post. At the same time, the Argentina stock market began plummeting on the news.

The banking facts are that when you owe the international banksters a whole lot of cash, if you do not pay up, your ass simply won’t last…

Based on the above statements by the Argentina President just 24 hours after this verdict, it appears she thinks this is a conspiratorial plot that won’t end with just economic warfare, she seriously thinks these same people are plotting to kill her.

Vice News had spoken with Larry Birns, director of the Council on Hemispheric Affairs who said, “The post-World War II relationship between the United States and Latin America has been so riddled with plots of various kinds. It’s very difficult to scoff at these allegations because so many of them after the fact turned out to be true.”

The historical facts are that the US government with the help of the CIA and other secret government agencies have been suspected to lead many plots to overthrow foreign governments over the last several decades. Reporters have alleged that the US was involved in past plots to topple governments such as in Iran, Iraq, South Vietnam, Chile, Brazil, Dominican Republic and the Congo. Please keep in mind that these media reports can often be backed up by cold hard facts such as Pentagon Papers, real life wars and human bloodshed….

Will Argentina soon be added to this list of martyred countries toppled in the name of the New World Order?