Other than some reports on #Paris have you seen any #MSM coverage about the movement spreading across #Europe – including #Sweden, #Germany, and #Belgium? Why don’t they want to report that citizens are fighting back? Coming to a #globalist movement near you? 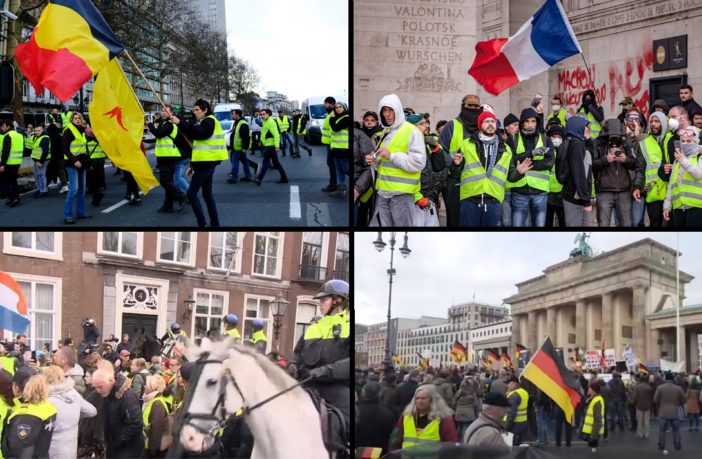 The yellow vests movement has spread to its fifth country, Sweden. Starting in France on 17 November, protests of the anti-globalist movements have been seen in Belgium, the Netherlands and Germany.

The yellow vests movement has spread to its fifth country, Sweden. Starting in France on 17 November, protests of the anti-globalist movement have been seen in Belgium, the Netherlands and Germany.

Now yellow vest demonstrations against the UN Migration Agreement have been announced in Sweden on Saturday and Sunday.

Last Sunday around 1,000 Swedes gathered outside Parliament in Stockholm to demonstrate against Sweden’s signing of the UN Migration Agreement. This weekend, even larger events with more speakers will be held in the same place.

Migration to Sweden is in focus because the whole of society is adversely affected when hundreds of thousands of migrants from the third world are brought into such a small country. However, in the future, other issues may also be addressed.

“The citizens have been informed that the led migration policy is a profit, which it is not”, says one of the speakers, independent journalist and writer Katerina Janouch.

“The issue of Sweden’s signing of the UN Migration Framework is too important to be hidden away. The signing is done behind the people’s backs.”

“There should be a referendum about this. We should not let a reality denying, high-on-power elite decide. It is becoming increasingly apparent that those who govern Sweden, whoever they are, don’t have what’s best for the Swedes in mind.”, she continues.

The Swedish resistance movement is inspired by the French, but not a copy of it. The Swedes focus on the issues considered most important for Sweden, while the French focus on their issues.

Participants have been asked to wear yellow vests and a lot of those are likely to be seen in Sweden this weekend. Protests will also be held in Gothenburg, Malmö and several other cities.

As the yellow vests movement is spreading through Europe protests have been announced in Brussels (Belgium), Amsterdam and Rotterdam (The Netherlands), Stockholm (Sweden), Paris and several German cities.

Most protests are peaceful, but as usual the escalations receive the most mainstream media coverage. Last week protests in Paris and Brussels completely escalated as some violent groups used the protests to attack people and destroy public property.

In the Netherlands the protests were peaceful last week and it is expected that they will be peaceful again.

If you are joining one of the protests, make your voice heard, stay safe and protest peaceful. It’s the best way to make a statement and not become demonised as a group by mainstream media.