Some say the pyramid in Alaska is a hoax while others maintain it is real.

Linda Moulton Howe first reported on a high strangeness finding in Alaska: an apparent buried pyramid about 50 miles from Mt. McKinley, according to Whitley Strieber at Unknown Country. He reports that ‘the object is apparently very old, both built and buried by unknown parties” and is larger than the Pyramid of Cheops

The pyramid is reportedly located in what is called the Alaskan Bermuda Triangle. 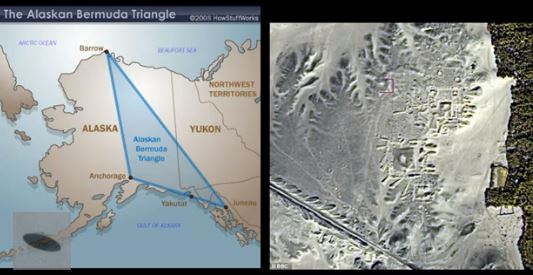 The existence of the pyramid might still be a ‘secret’ if it wasn’t for a television news broadcast from ‘channel 13 out of Anchorage’ in 1992, which had a segment concerning the ‘discovery’ by ‘geologists’ and other ‘scientists’ of an underground Pyramid many times the size of Cheops. The discovery was made due to a scheduled Chinese underground nuclear test and the decision by these scientists to set up a whole bunch of equipment and use the seismic information to ‘map’ a certain area in Alaska.  As a result they discovered the said underground pyramid.

The reason we in 2012 know about this is  because a retired military person was in Alaska at the same time as the broadcast and saw it (along with all his buddies at his base). He waited for 20 years and then told Linda Moulton Howe of Earthfiles.com website.  According to Howe, the latitude/longitude is 63°17’51.40″N 152°31’24.49″W  about fifty miles southwest of Mount McKinley is: Google Earth Lat/Long: . The elevation there is 1,150 feet

“The Alaska Bermuda Triangle slices through four of the state’s regions, from the southeastern wilderness and fjords to the interior tundra and up to the arctic mountain ranges. Its points include the large swath of land from Juneau and Yakutat in the southeast, the Barrow mountain range in the north, and Anchorage in the center of the state,” according to Cristen Coger on HowStuffWorks.

“Even the native Alaska Tlingit Indians that live near Juneau have integrated this peculiar mystery into their religious culture. They believe an evil spirit named Kushtaka, a cross between a man and an otter, captures people who have drowned or gotten lost, whisking them away to his realm never to be seen again,” writes Conger.