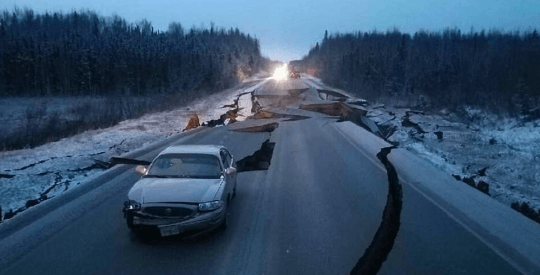 We just got more evidence that our planet is becoming increasingly unstable.  On Friday a magnitude 7.0 earthquake destroyed homes, ripped apart roads and destroyed infrastructure all throughout Anchorage, Alaska.  According to the USGS, the earthquake hit at 8:29 AM and the epicenter was approximately 7 miles north of Anchorage.  That quake was followed by a highly destructive magnitude 5.7 aftershock just a little while later.  Alaska Governor Bill Walker has declared a state of emergency, and the entire region is in a state of chaos.  Unfortunately, as global seismic activity continues to increase, more quakes like this are inevitable.  Like Alaska, the entire west coast of the United States sits directly along the “Ring of Fire”, and many have warned that “the Big One” is coming sooner rather than later.

Tonight, large numbers of Anchorage residents are suddenly homeless, and that includes Alaska’s most famous politician…

Light fixtures fell, glass shattered, roadways and supermarket aisles were awash from food spilled from broken jars. Video images showed some roadways had collapsed.  One man tweeted a photo of his toppled chimney and a local television station showed its studio filled with debris.

Former Alaska governor and vice presidential candidate Sarah Palin tweeted, saying her family is intact but her “house is not.”

At this point it is extremely difficult to get around Anchorage.  Numerous roads were shredded by the quake and that includes the only road to Wasilla…

The quake was so strong it broke windows, cracked buildings and knocked local news station KTUU off air. Several highway and local roads crumbled in the temblor, stranding cars in the asphalt mess. The shake also broke up the only road connecting Anchorage and the nearby towns of Wasilla and Palmer.

It is going to take an extended period of time for authorities to assess the economic damage and to figure out how many human casualties there were.

Many took cover under desks and in closets as the shaking happened, but those caught out in the open didn’t have anywhere to go.

“It felt like my car was uncontrollably sliding left and right and I just didn’t understand because it was going perfectly fine up until then. It felt like the ground was gonna open up underneath you,” Lohr said.

In the aftermath of this Anchorage earthquake, many are wondering how long it will be before the west coast is struck by a major quake.

And the truth is that we have already been seeing quite a bit of shaking.  In fact, a rather sizable earthquake did hit southern California very early on Thursday morning…

A 4.1 earthquake has rattled California and parts of Mexico, with San Diego among the cities hit.

The earthquake struck California at 5.48am, waking up many residents in the south of the state and north-west Mexico. One resident said on earthquake tracking website EMSC-CSEM: “The roof creaked and the ground rumbled.” Another reported: “It woke me up.”

Those that have been living in California have been hearing about “the Big One” for decades, but it hasn’t happened yet.

So many of them have been lulled into a false sense of security, but that is a huge mistake.

According to Cal State Fullerton professor Matt Kirby, when “the Big One” finally does hit, large portions of the coastline could be plunged into the ocean “relatively instantaneously”…

Cal State Fullerton professor Matt Kirby, who worked with the Leeper on the study, said the sinking would occur quickly and likely result in part of California being covered by the sea.

“It’s something that would happen relatively instantaneously,” Prof Kirby said. “Probably today if it happened, you would see seawater rushing in.”

Further north, the Cascadia Subduction Zone is a major concern.

Scientists assure us that someday a massive earthquake will strike along the Cascadia Subduction Zone which will destroy pretty much everything west of Interstate 5.  The following comes from one of my previous articles…

One day it will happen.  With little or no warning, the Cascadia Subduction Zone will produce a catastrophic earthquake and accompanying tsunami that will essentially destroy everything west of Interstate 5 in the Pacific Northwest.  It will be the worst natural disaster up to that point in American history, and as you will see below, the experts are saying that we are completely and utterly unprepared for it.  Of course the San Andreas Fault gets more publicity, but the truth is that the Cascadia Subduction Zone is capable of producing a quake “almost 30 times more energetic” than anything the San Andreas Fault can produce.  The Cascadia Subduction Zone stretches from northern Vancouver Island all the way down to northern California, and one expert recently told CBN News that all of the major cities in the region are essentially “built on a time bomb”…

For years I have been warning about the instability of the west coast, and this earthquake in Alaska should be a major wake up call.

The west coast is home to the core of our tech industry and some of the most expensive real estate in the entire world, but the clock is ticking for that entire region.

Without warning, someday “the Big One” will literally shred the entire coastline, and it will be a disaster unlike anything that we have ever seen before in American history.

About the author: Michael Snyder is a nationally syndicated writer, media personality and political activist. He is publisher of The Most Important News and the author of four books including The Beginning Of The End and Living A Life That Really Matters.

Courtesy of The Economic Collapse Blog