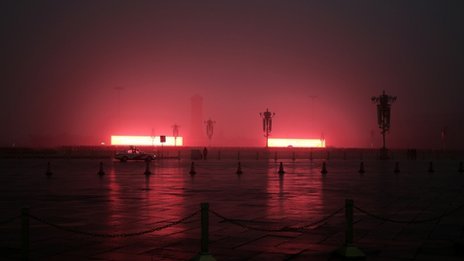 Red alert? Across Beijing, there is no escaping the blanket of pollution

All week in Beijing, in offices and homes, in lifts and shops, restaurants, taxis and buses, one topic has dominated conversation – Beijing’s foul air.

The descriptions of the grey smog that’s hung over the city get more and more extreme: “Airmageddon”, the “Airpocalypse”.

Walking out into Beijing’s streets is like plunging into a swirling soup. The pollution swathes the city, wreathing everything in grey.

To get a sense of it take a look at this slideshow of before and after pictures that give a sense of what China’s toxic sky is really like.

A combination of coal emissions, dirty diesel and industrial gases, the smog has smothered everything for days. On Thursday, levels still hovered around the “very unhealthy” mark.

On Thursday too there were reported to be more than 100 cars in crashes in Beijing. The roads were icy and slippery, but poor visibility cannot have helped.

What were billed as “tough” measures brought in by Beijing’s government this week to try to improve things simply have not been enough.

On Tuesday, 103 factories were ordered to shut down, and a third of government cars ordered off the roads to combat what was already being described as the worst January smog since 1954.

But even state-controlled media now say Beijing’s tough measures were ignored by city officials themselves.