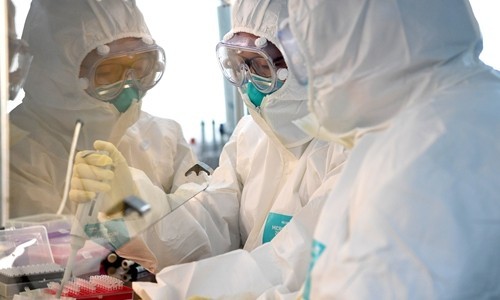 Air Canada is extending its suspension of flights between Canada and China until April as the number of coronavirus cases — and the number of countries affected — continues to grow.

Air Canada is extending its suspension of flights between Canada and mainland China until April as the number of coronavirus cases — and the number of countries affected — continues to grow.

The country’s largest domestic and international airline announced Tuesday that service to Beijing and Shanghai will be cancelled until April 10. The company initially grounded flights for the month of February after the federal government issued an advisory warning against non-essential travel to China.

“Air Canada will continue to monitor this evolving situation closely in consultation with the Public Health Agency of Canada, Transport Canada and Global Affairs and will adjust its schedule as appropriate,” says a statement from the company.

Asked in the House of Commons Tuesday if the government has done enough to screen potentially infected individuals entering the country, Health Minister Patty Hajdu insisted Canada has imposed “strict” measures. But she noted the coronavirus has now spread to at least 35 countries — including some that may not have the capacity to properly diagnose it.

“Those measures are less effective and it’s time to turn our attention and our resources to making sure we’re prepared on the domestic stage,” she said.

Hajdu said there are not many cases in Canada now, but that could change at any time.

“We should be clear that repatriation efforts are limited at this point. It’s difficult at this point to commit to an ongoing repatriation process. You have to remember that it takes a lot of resources and the resources have to be focused in terms of our domestic response,” she said. “It’s important for Canadians to realize this may cause disruptions in their lives.”

Dr. Theresa Tam, Canada’s chief public health officer, said Monday Canadian officials are preparing to respond to a possible pandemic in the event there is a community outbreak domestically. The World Health Organization (WHO) has declared the epidemic a global health emergency, but has not yet called it a pandemic.

Nations around the world have been imposing strict travel restrictions in an attempt to contain the virus’s spread.

On his way into a cabinet meeting this morning in Ottawa, Champagne called the outbreak a “dynamic” situation and said Canadians with travel plans should take precautions.

“Make sure you check before you go. That’s the best advice I can give,” he said.

“We’ve seen new places where the coronavirus has expanded — in South Korea, we saw in Italy today not only the north of Italy but Sicily and Tuscany. We’ve seen what’s happening in Iran.”

Global Affairs Canada (GAC) has heightened its travel advisory for South Korea, where nearly 1,000 cases have been reported. The department is now warning travellers to exercise a “high degree of caution” in travelling to the country due to the spread of the novel coronavirus.

“COVID-19 can spread from person to person, and in Italy cases have been confirmed in multiple regions in the north of the country. Sustained community spread of the virus is being reported. This means it is unknown how or where some people became infected, and the spread is ongoing,” the advisory reads. MORE @ SOURCE