The release today is even more revealing than the handwritten notes released last night; and specifically President Obama’s “by the book” statement on January 5, 2017, takes on an entirely new light.  They may not realize it yet, but this release implicates Obama.

Within the release we discover an “Electronic Communication” or “EC” from the Washington FBI field office recommending to close the FBI investigation of General Flynn on January 4, 2017, due to “no derogatory information.” However, FBI Agent Peter Strzok immediately responds to the FBI team [main headquarters] saying: “don’t do it yet’… and the plot unfolds.

There are FBI codenames within the release that need some explanation prior to review:

Let’s take a walk through the information starting with the FBI electronic communication.

First it is valuable to note three points from the first page: 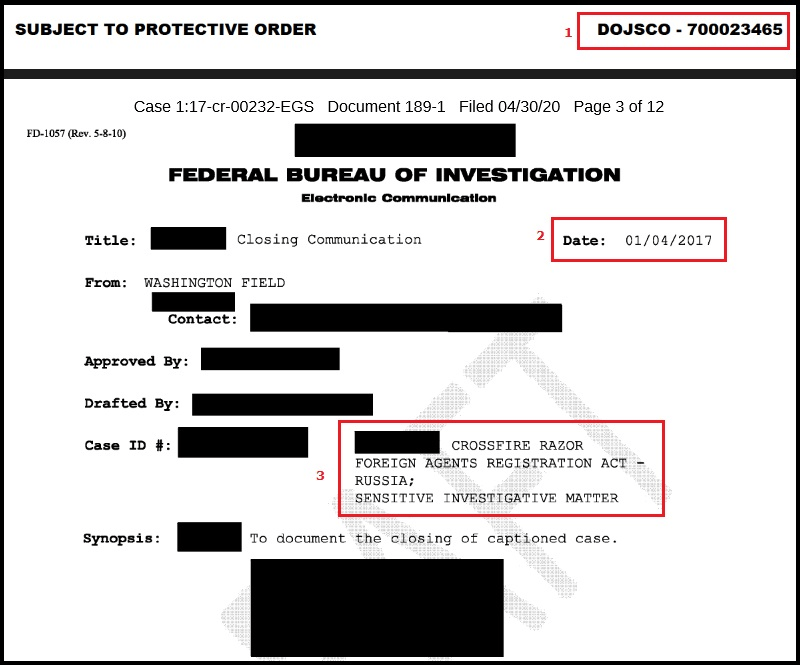 The FBI Washington Field Office says they are going to close the investigation of General Flynn because there is no derogatory information as a result of multiple investigative inquires: 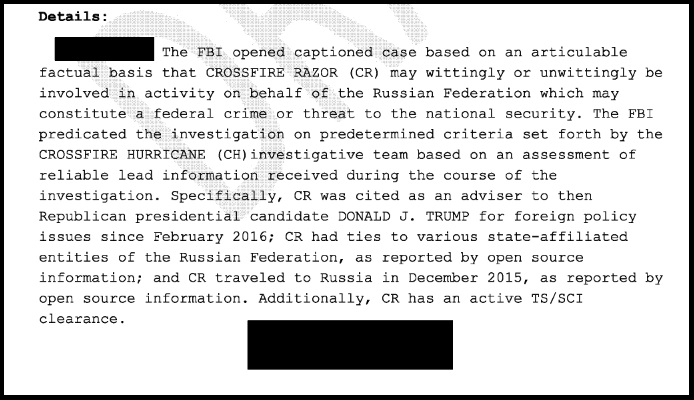 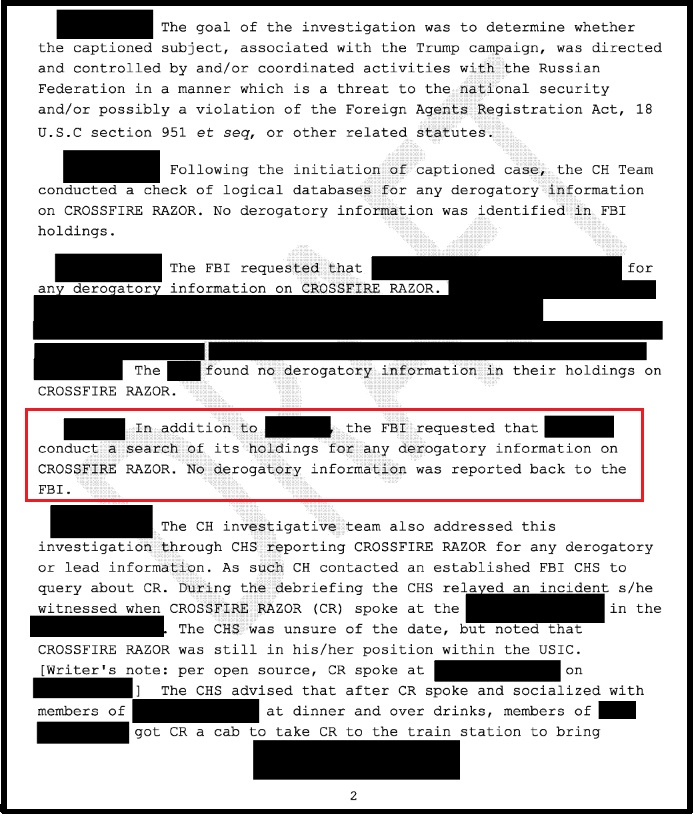 The EC document then describes their work with Confidential Human Source (CHS) Stefan Halper.  Interestingly, Halper lied to the FBI and told them he had attended an event with Michael Flynn in Moscow and was a direct eye-witness.  “During the debriefing the CTH relayed an incident s/he witnessed”…. Halper never attended the Moscow event; he lied to the FBI. 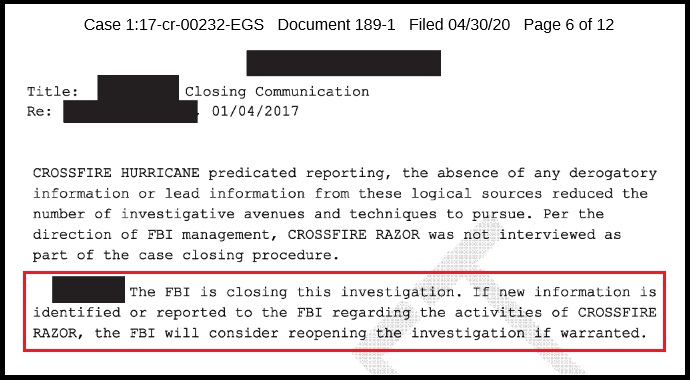 The EC notes the FBI is closing this investigation.  However, Peter Strzok goes bananas and immediately starts texting FBI officials to keep the investigation open…. 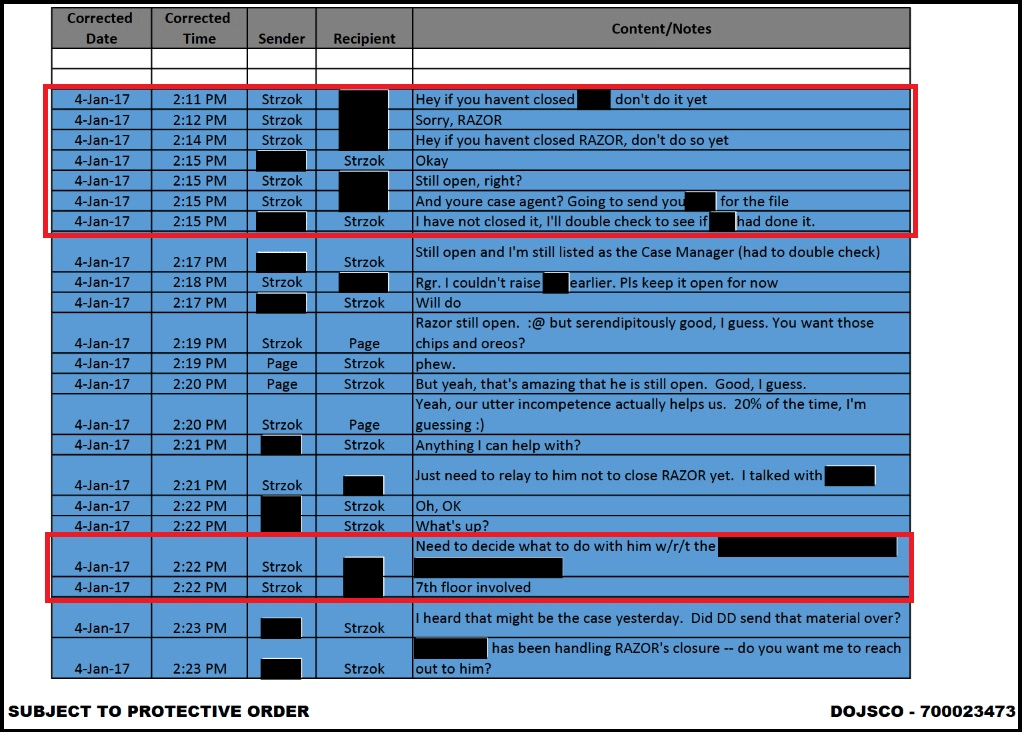 Which leads to a 2:22pm message where Peter Strzok notes “7th floor involved”.  That means FBI Director James Comey is now engaged on the issue.

James Comey being actively engaged is important.  Previously Comey said he was unaware of what they were doing…  Additionally this text and activity is January 4, 2017.

The very next day, January 5th, James Comey goes to the White House for a meeting with President Obama and Vice-President Biden.

“President Obama began the conversation by stressing his continued commitment to ensuring that every aspect of this issue is handled by the Intelligence and law enforcement communities “by the book“.”

“The President stressed that he is not asking about, initiating or instructing anything from a law enforcement perspective. He reiterated that our law enforcement team needs to proceed as it normally would, “by the book.””Susan Rice Memo

It doesn’t take an investigative genius to see what took place here.

SIDEBAR on THIS ISSUE: This long forgotten letter from Susan Rice’s lawyer Kathryn Ruemmler (who was also the former White House Counsel to President Obama).  Notice that in Ruemmler’s letter she specifically says the January 5th meeting was about Flynn:

[Feb 23, 2018] The memorandum to file drafted by Ambassador Rice memorialized an important national security discussion between President Obama and the FBI Director and the Deputy Attorney General. President Obama and his national security team were justifiably concerned about potential risks to the Nation’s security from sharing highly classified information about Russia with certain members of the Trump transition team, particularly Lt. Gen. Michael Flynn*.*
[…] While serving as National Security Advisor, Ambassador Rice was not briefed on the existence of any FBI investigation into allegations of collusion between Mr. Trump’s associates and Russia, and she later learned of the fact of this investigation from Director Comey’s subsequent public testimony.
(Reummler Letter)

How could Ms. Susan Rice be aware of a “national security compromise”, “particularly surrounding Lt. Gen. Michael Flynn” after a “briefing by the FBI”, if she was “not briefed on the existence of an FBI investigation”?  With all of this information, these stories are falling apart.