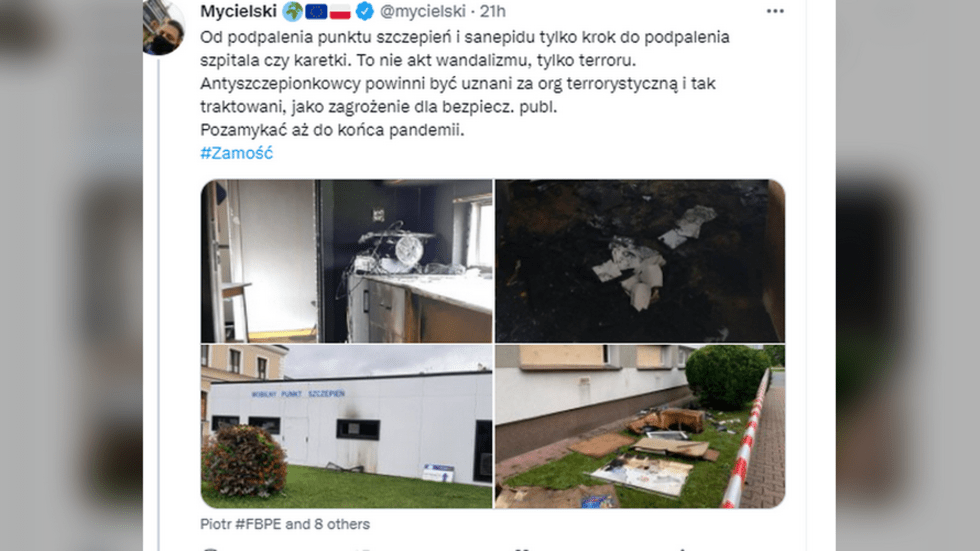 The recent attack on a vaccination site in Poland was a “terrorist attack” incited by an online disinformation campaign, the health minister said, promising to fight against hatred toward medical workers. Source

According to regional police, an unknown perpetrator set a mobile vaccination unit on fire and started another blaze at a local office of the state epidemiological service in the southeastern city of Zamosc on Sunday night.

CCTV footage shows a masked man breaking a window of the building, pouring flammable liquid inside, and fleeing the crime scene on a bicycle.

Health Minister Adam Niedzielski said the arsonist was motivated by the spread of falsehoods on social media and offered 10,000 zloty ($2,600) for information regarding his identity.

“Those people who also inspired this perpetrator are surely aware that this is not only an attack on the [vaccination site] behind me, but an attack on the Polish state,” the health minister said, adding that the perpetrator’s goal was to discourage people from getting vaccinated.

In fact, there is no other word, no other term for it, so we can just say that we are dealing with an act of terror.

Niedzielski also cited an incident from last week when a group of anti-vaccination activists tried to break into a vaccination center in the town of Grodzisk Mazowiecki and scuffled with staff. Two people were detained after police intervened.

“As long as I am minister of health, I will not allow any unpunished threats and hate directed at people involved in vaccinations,” Niedzielski said.

Poland has seen a rise in anti-vaccination incidents in recent months. Niedzielski himself was heckled last month in Jezow by a group of around 20 supporters of right-wing MP Grzegorz Braun, who called the ongoing immunization campaign a “large-scale medical experiment on humans.”

On Monday, the Polish Academy of Sciences called for compulsory vaccination of people that perform essential services, including doctors, teachers, police officers, soldiers, and firefighters.

President Andrzej Duda, however, spoke out against vaccination mandates. “I am skeptical about any methods of coercion,” he told Polish media on Friday. “I am in favor of soft persuasion, not coercion, because Polish people always have deep opposition toward any kind of coercion.”

According to the Polish government, 16.1 million have received two doses of the vaccine in the country of around 38 million.