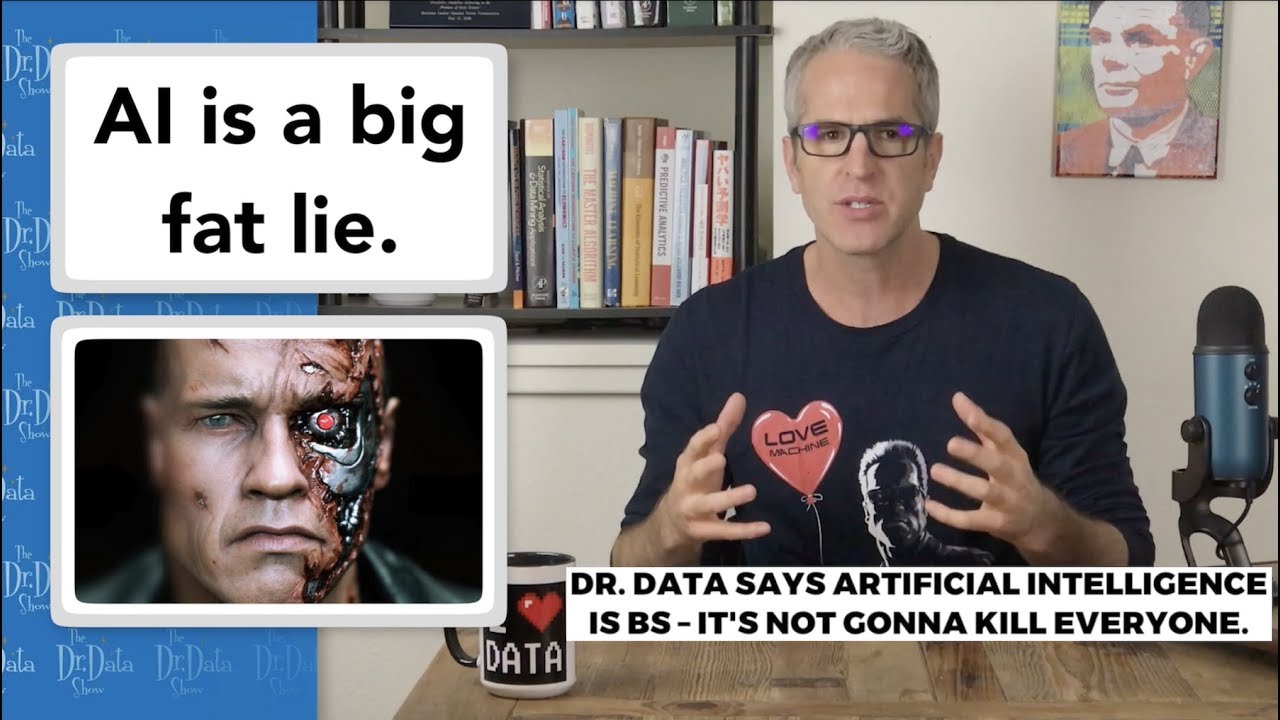 AI is a big fat lie. Artificial intelligence is a fraudulent hoax — or in the best cases it’s a hyped-up buzzword that confuses and deceives.

The much better, precise term would instead usually be machine learning — which is genuinely powerful and everyone oughta be excited about it.

On the other hand, AI does provide some great material for nerdy jokes.

1) Unlike AI, machine learning’s totally legit. It is, by the way, the topic of this entire web series, The Dr. Data Show, and, I gotta say, it wins the Awesomest Technology Ever award, forging advancements that make ya go, “Hooha!”. However, these advancements are almost entirely limited to supervised machine learning, which can only tackle problems for which there exist many labeled or historical examples in the data from which the computer can learn. This inherently limits machine learning to only a very particular subset of what humans can do — plus also a limited range of things humans can’t do.

2) AI is BS. And for the record, the naysayer before you taught the Columbia University graduate-level “Artificial Intelligence” course, as well as other related courses there.

AI is nothing but a brand. A powerful brand, but an empty promise. The concept of intelligence is entirely subjective and intrinsically human. Those who espouse the limitless wonders of AI and warn of its dangers — including the likes of Bill Gates and Elon Musk — all make the same false presumption: that intelligence is a one-dimensional spectrum and that technological advancements propel us along that spectrum, down a path that leads toward human-level capabilities. Nuh uh. The advancements only happen with labeled data. We are advancing quickly, but in a different direction and only across a very particular, restricted microcosm of capabilities.

The term artificial intelligence has no place in science or engineering. “AI” is valid only for philosophy and science fiction — which, by the way, I totally love the exploration of AI in those areas.

3) AI isn’t gonna kill you. The forthcoming robot apocalypse is a ghost story. The idea that machines will uprise on their own volition and eradicate humanity holds no merit.

Ok, let’s begin with a clip of an AI system out of Austria explaining how it itself works.

That is of course the titular robot from “The Terminator.” The neural network of which that famous robot speaks is actually a real kind of machine learning method. A neural network is a way to depict a complex mathematical formula, organized into layers. This formula can be trained to do things like recognize images for self-driving cars.

What you see it doing here is truly amazing. The network’s identifying all these objects. With machine learning, the computer has essentially programmed itself to do this. On its own, it has worked out the nitty gritty details of exactly what patterns or visual features to look for. Machine learning’s ability to achieve such things is awe-inspiring and extremely valuable.

The latest improvements to neural networks are called deep learning. They’re what make this level of success in object recognition possible. With deep learning, the network is quite literally deeper — more of those layers. However, even way way back in 1997, the first time I taught the machine learning course, neural networks were already steering self-driving cars, in limited contexts, and we even had our students apply them for face recognition as a homework assignment.

But the more recent improvements are uncanny, boosting its power for many industrial applications. So we’ve even launched a new conference, Deep Learning World…

So, doesn’t that mean they’re getting smarter and smarter, moving towards human intel?

It can get really good at certain tasks, but….