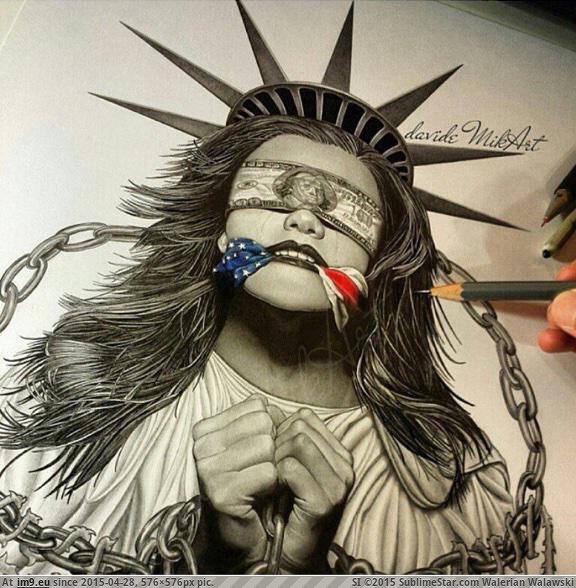 Submitted by Michael Snyder via The Economic Collapse blog,

The world didn’t completely fall apart in 2015, but it is undeniable that an immense amount of damage was done to the U.S. economy.

This year the middle class continued to deteriorate, more Americans than ever found themselves living in poverty, and the debt bubble that we are living in expanded to absolutely ridiculous proportions.  Toward the end of the year, a new global financial crisis erupted, and it threatens to completely spiral out of control as we enter 2016.

Over the past six months, I have been repeatedly stressing to my readers that so many of the exact same patterns that immediately preceded the financial crisis of 2008 are happening once again, and trillions of dollars of stock market wealth has already been wiped out globally.  Some of the largest economies on the entire planet such as Brazil and Canada have already plunged into deep recessions, and just about every leading indicator that you can think of is screaming that the U.S. is heading into one.

So don’t be fooled by all the happy talk coming from Barack Obama and the mainstream media.  When you look at the cold, hard numbers, they tell a completely different story.  The following are 58 facts about the U.S. economy from 2015 that are almost too crazy to believe…

#2 The lack of saving is especially dramatic when you look at Americans under the age of 55.  Incredibly, fewer than 10 percent of all Millennials and only about 16 percent of those that belong to Generation X have 10,000 dollars or more saved up.

#3 It has been estimated that 43 percent of all American households spend more money than they make each month.

#4 For the first time ever, middle class Americans now make up a minority of the population. But back in 1971, 61 percent of all Americans lived in middle class households.

#5 According to the Pew Research Center, the median income of middle class households declined by 4 percent from 2000 to 2014.

#6 The Pew Research Center has also found that median wealth for middle class households dropped by an astounding 28 percent between 2001 and 2013.

#7 In 1970, the middle class took home approximately 62 percent of all income. Today, that number has plummeted to just 43 percent.

#8 There are still 900,000 fewer middle class jobs in America than there were when the last recession began, but our population has gotten significantly larger since that time.

#9 According to the Social Security Administration, 51 percent of all American workers make less than $30,000 a year.

#11 A recent nationwide survey discovered that 48 percent of all U.S. adults under the age of 30 believe that “the American Dream is dead”.

#12 Since hitting a peak of 69.2 percent in 2004, the rate of homeownership in the United States has been steadily declining every single year.

#13 At this point, the U.S. only ranks 19th in the world when it comes to median wealth per adult.

#14 Traditionally, entrepreneurship has been one of the primary engines that has fueled the growth of the middle class in the United States, but today the level of entrepreneurship in this country is sitting at an all-time low.

#15 For each of the past six years, more businesses have closed in the United States than have opened.  Prior to 2008, this had never happened before in all of U.S. history.

#16 If you can believe it, the 20 wealthiest people in this country now have more money than the poorest 152 million Americans combined.

#18 If you have no debt and you also have ten dollars in your pocket, that gives you a greater net worth than about 25 percent of all Americans.

#19 The number of Americans that are living in concentrated areas of high poverty has doubled since the year 2000.

#20 An astounding 48.8 percent of all 25-year-old Americans still live at home with their parents.

#21 According to the U.S. Census Bureau, 49 percent of all Americans now live in a home that receives money from the government each month, and nearly 47 million Americans are living in poverty right now.

#23 According to Kathryn J. Edin and H. Luke Shaefer, the authors of a new book entitled “$2.00 a Day: Living on Almost Nothing in America“, there are 1.5 million “ultrapoor” households in the United States that live on less than two dollars a day. That number has doubled since 1996.

#24 46 million Americans use food banks each year, and lines start forming at some U.S. food banks as early as 6:30 in the morning because people want to get something before the food supplies run out.

#25 The number of homeless children in the U.S. has increased by 60 percent over the past six years.

#26 According to Poverty USA, 1.6 million American children slept in a homeless shelter or some other form of emergency housing last year.

#27 Police in New York City have identified 80 separate homeless encampments in the city, and the homeless crisis there has gotten so bad that it is being described as an “epidemic”.

#28 If you can believe it, more than half of all students in our public schools are poor enough to qualify for school lunch subsidies.

#29 According to a Census Bureau report that was released a while back, 65 percent of all children in the U.S. are living in a home that receives some form of aid from the federal government.

#30 According to a report that was published by UNICEF, almost one-third of all children in this country “live in households with an income below 60 percent of the national median income”.

#31 When it comes to child poverty, the United States ranks 36th out of the 41 “wealthy nations” that UNICEF looked at.

#32 An astounding 45 percent of all African-American children in the United States live in areas of “concentrated poverty”.

#33 40.9 percent of all children in the United States that are being raised by a single parent are living in poverty.

#35 According to a recent Pew survey, approximately 70 percent of all Americans believe that “debt is a necessity in their lives”.

#36 53 percent of all Americans do not even have a minimum three-day supply of nonperishable food and water at home.

#37 According to John Williams of shadowstats.com, if the U.S. government was actually using honest numbers the unemployment rate in this nation would be 22.9 percent.

#39 The labor force participation rate for men has plunged to the lowest level ever recorded.

#40 Wholesale sales in the U.S. have fallen to the lowest level since the last recession.

#41 The inventory to sales ratio has risen to the highest level since the last recession.  This means that there is a whole lot of unsold inventory that is just sitting around out there and not selling.

#42 The ISM manufacturing index has fallen for five months in a row.

#43 Orders for “core” durable goods have fallen for ten months in a row.

#44 Since March, the amount of stuff being shipped by truck, rail and air inside the United States has been falling every single month on a year over year basis.

#45 Wal-Mart is projecting that its earnings may fall by as much as 12 percent during the next fiscal year.

#46 The Business Roundtable’s forecast for business investment in 2016 has dropped to the lowest level that we have seen since the last recession.

#47 Corporate debt defaults have risen to the highest level that we have seen since the last recession.  This is a huge problem because corporate debt in the U.S. has approximately doubled since just before the last financial crisis.

#48 Holiday sales have gone negative for the first time since the last recession.

#49 The velocity of money in the United States has dropped to the lowest level ever recorded.  Not even during the depths of the last recession was it ever this low.

#50 Barack Obama promised that his program would result in a decline in health insurance premiums by as much as $2,500 per family, but in reality average family premiums have increased by a total of $4,865 since 2008.

#51 Today, the average U.S. household that has at least one credit card has approximately $15,950 in credit card debt.

#53 According to Dr. Housing Bubble, there have been “nearly 8 million homes lost to foreclosure since the homeownership rate peaked in 2004″.

#54 One very disturbing study found that approximately 41 percent of all working age Americans either currently have medical bill problems or are paying off medical debt.  And collection agencies seek to collect unpaid medical bills from about 30 million of us each and every year.

#55 The total amount of student loan debt in the United States has risen to a whopping 1.2 trillion dollars.  If you can believe it, that total has more than doubled over the past decade.

#56 Right now, there are approximately 40 million Americans that are paying off student loan debt.  For many of them, they will keep making payments on this debt until they are senior citizens.

#57 When you do the math, the federal government is stealing more than 100 million dollars from future generations of Americans every single hour of every single day.

#58 An astounding 8.16 trillion dollars has already been added to the U.S. national debt while Barack Obama has been in the White House.  That means that it is already guaranteed that we will add an average of more than a trillion dollars a year to the debt during his presidency, and we still have more than a year left to go.

What we have seen so far is just the very small tip of a very large iceberg.  About six months ago, I stated that “our problems will only be just beginning as we enter 2016″, and I stand by that prediction.

We are in the midst of a long-term economic collapse that is beginning to accelerate once again.  Our economic infrastructure has been gutted, our middle class is being destroyed, Wall Street has been transformed into the biggest casino in the history of the planet, and our reckless politicians have piled up the biggest mountain of debt the world has ever seen.

Anyone that believes that everything is “perfectly fine” and that we are going to come out of this “stronger than ever” is just being delusional.  This generation was handed the keys to the finest economic machine of all time, and we wrecked it.  Decades of incredibly foolish decisions have culminated in a crisis that is now reaching a crescendo, and this nation is in for a shaking unlike anything that it has ever seen before.