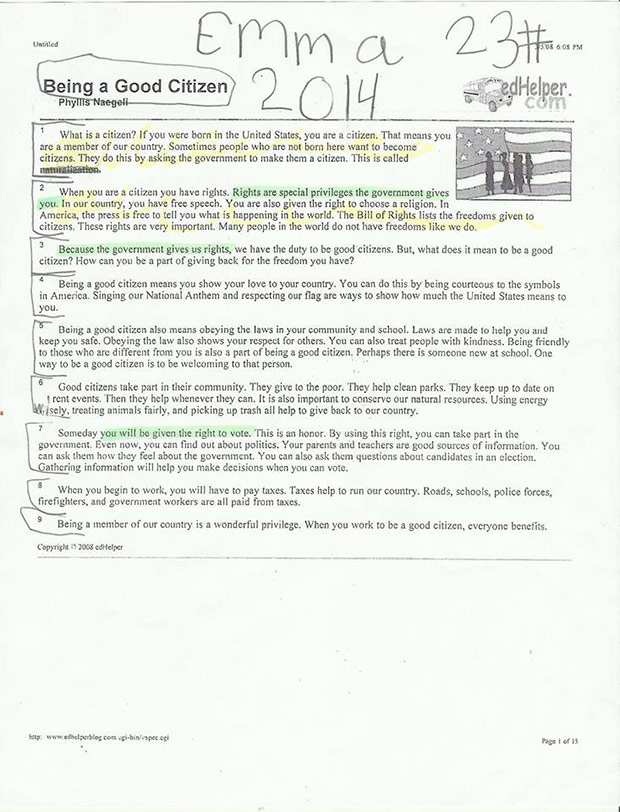 Apparently this homework sheet given out to 2nd graders about “Being a Good Citizen” is teaching them that the government GIVES us our rights.

2. When you are a citizen you have rights. Rights are special privileges the government gives you. In our country, you have free speech. You are also given the right to chooes a religion. In America, the press is free to tell you what is happening in the world. The Bill of Rights lists the freedoms given to citizens. These rights are very important. Many people in the world do not have freedoms like we do.

A derivative of the word “give” is used no less than three times just in example number two. Number three begins with, “Because the government gives us rights, we have the duty to be good citizens.” Number four tells us being a good citizen means “you show your love for your country.” We are told to obey all laws. We are then told someday (in number seven) we will be given the right to vote, which will be an “honor.” It goes on to tell us to pay our taxes.

This is what eight-year-old kids are being taught in this country.

Wait, did I say taught? I meant being indoctrinated to blindly believe. They might as well exchange the word “citizen” in “being a good citizen” for “statist” or “fascist” or “communist.”

The only thing this sheet didn’t say was “Obey. Consume. Sleep.”

Not that it should even have to be said, but our rights are inalienable. Definition: unable to be taken away from or given away by the possessor. Why? Because they are inherent. Definition: existing in something as a permanent, essential, or characteristic attribute. The government is not in a position (although it is trying as hard as it’s tyrannical centralized little heart can) to grant or give rights which we already have. By the same token, those rights cannot be taken away by the government either.

You wouldn’t know it from this worksheet however. That’s the real message these kids are getting here. Because if the kids can be taught to believe the government gives them their rights, then would that same government not also be able to condition them that it can take their rights away as well?

Some lies are so big, it takes a sock puppet to set things straight…watch the video above. Next time, I break out the googly eyes.

In questions of power, then, let no more be heard of confidence in man, but bind him down from mischief by the chains of the Constitution. ~Thomas Jefferson

Aaron Dykes and Melissa Melton created Truthstream Media.com as an outlet to examine the news, place it in a broader context, uncover the deceptions, pierce through the fabric of illusions, grasp the underlying factors, know the real enemy, unshackle from the system, and begin to imagine the path towards taking back our lives, one step at a time, so that one day we might truly be free…