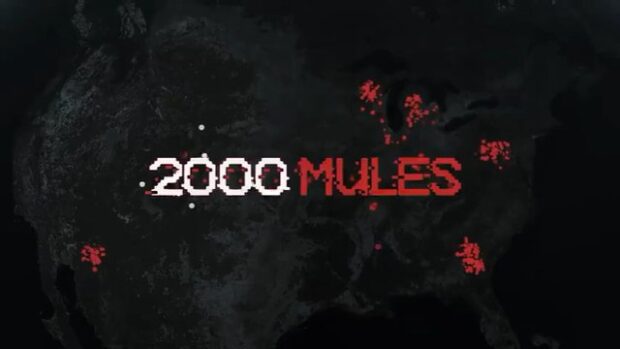 IRVING, Texas–(BUSINESS WIRE)– Salem Media Group, Inc. (NASDAQ: SALM) announced today that in less than two weeks in full release, the movie 2000 Mules, directed by Dinesh D’Souza, with Salem Media Group as Executive Producer, has already become the most successful political documentary in a decade. Already, 1 million people have seen the movie, with more views coming. The movie is now available for download and DVD purchase on SalemNOW.com, and has become a huge hit on Rumble and its Locals platform.

2000 Mules has already grossed $10 million in revenue, and in net revenue it is the most successful documentary since Obama’s America, produced by Dinesh D’Souza ten years ago.

“The movie is a success financially for sure, but also it is successful in its political and cultural influence,” said D’Souza. “It’s the most talked about movie out there right now, making headlines in multiple publications, and is trending extremely high on social media.”

Almost a platoon of left wing fact checkers have descended on the movie in an unsuccessful attempt to squash its credibility. The film has taken something that many people suspected from the November 2020 elections, and provided proof of illegal ballot harvesting, both in geo-targeting of cell phone data, and in actual video surveillance of the many unmanned ballot boxes in the five key battleground states.

The movie’s shocking revelations are based on research done by True The Vote, a non-profit dedicated to providing election integrity and honest voting practices. The film features five Salem radio talk show hosts as they walk through the process of learning what the evidence shows, and then discussing what this means for the American belief in free and fair elections. Those hosts, Dennis Prager, Sebastian Gorka, Charlie Kirk, Eric Metaxas and Larry Elder all came away disturbed at what they learned really happened to hand the election victory to Joe Biden.

JustTheNews.com says “Dinesh D’Souza’s 2000 Mules: Ballot trafficking exposé has the evidence; can it get a hearing?”

Salem Media Group is America’s leading multimedia company specializing in Christian and conservative content, with media properties comprising radio, digital media and book and newsletter publishing. Each day Salem serves a loyal and dedicated audience of listeners and readers numbering in the millions nationally. With its unique programming focus, Salem provides compelling content, fresh commentary and relevant information from some of the most respected figures across the Christian and conservative media landscape. Learn more about Salem Media Group, Inc. at www.salemmedia.com, Facebook and Twitter.

2000 Mules. Fox’s lawyers are keeping it off of Fox. Everything will be published. #2000mules