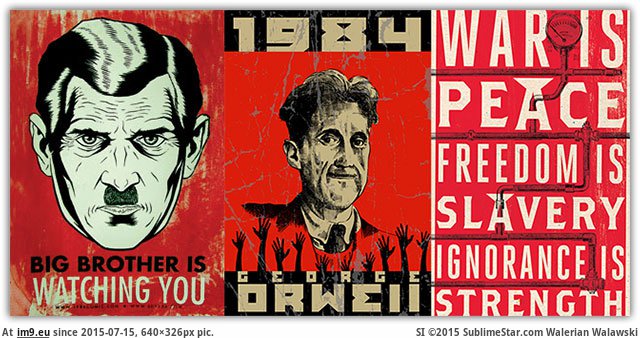 Submitted by Martin Armstrong via ArmstrongEconomics.com,

Spain has shown that it is fully on board with the Brussels authoritarian direction of ending democracy. Those in power have simply convinced themselves that the people do not understand what is good for them so they must impose their will upon the people but raw force. How does this differ in any what from the justification of imposing communism? This is the death of all freedom and it is upon our doorstep.

Here are the new laws in Spain:

1. If you photograph security personnel and then share these images on social media: up to €30.000 fine (particularly if photo exposes violence used against a member of the public). This fine could increase depending on the number of Instagram or social media followers you have.

2. Tweet or retweet information or the “location of an organized protest” can now be interpreted as an act of terrorism as it incites others to “commit a crime” (now that “demonstrating” in many ways has become a crime). Sound “1984”-ish? Read about Orwell and his time in Spain.

3. Snowden-like whistle blowing is now defined as an act of terrorism. If you write for a local publication, be careful what you print, whom you speak to, and whether the government is listening.

4. Visiting or consulting terrorist websites – even for investigative purposes – can be interpreted as an act of terrorism. Make sure you use “Tor” browser, reject cookies, and don’t allow pop-ups. Not to mention, don’t post it on your Facebook timeline!

5. Be careful with the royal jokes! Any satirical comment against the royal family is a new crime “against the Crown”. For example, “What did Leticia and the Bishop have to say after they ––“ (SORRY CENSORED).

6. No more hassling elected members of the government or local authorities – even if they say one thing in order to be elected, but then go and do the exact opposite. Confronting them about this hypocritical behavior. Even if you see them in the street chatting to a street cleaner, dining at their favorite expensive restaurant, or having their shoes shined by that physics graduate who cannot find a decent job in the country, hassling them about their behavior is now a criminal offence.

7. Has your local river been so polluted by that plastic factory along the edge that all life has extinguished? Well, tough! Greenpeace or similar protests are now finable from €601–€30.000.

8. Protests in a spontaneous way outside Parliament are now illegal. For example if Parliament passes a hugely unpopular bill, or are debating something extremely important to you or your community, it is now finable from €601 – €30.000. Tip: Use Google Maps to protest just around the corner – but don’t tweet the location!

9. Obstructing an officer in the course of their business, “resisting arrest”, refusing to leave a demonstration when told, or getting in the way of a swinging baton are all now finable offences from €601 – €30.000.

10. Showing lack of respect to officers of the law is an immediate fine of €100 – €600. Answering back, asking a disrespectful question, making a funny face, showing your bottom to an officer of the law, or telling him/her that their breath reminds you of your dog’s underparts is now, sadly, not advisable.

11. Occupying, squatting, or refusing to leave an office, business, bank or other place until your complaint has been heard as a protest is now a €100 – €600 fine (no more flash mobs).

12. Digital protests: Writing something that could technically “disturb the peace” is a now a crime. Bloggers beware, for no one has yet defined whose peace you could be disturbing. On July 1st, 2015, Spain officially became a police state. There’s simply no other way to put it. The “gag law” passed late last year went into effect on that date, and if you still have any doubt about how extreme and oppressive these laws are, let’s take a quick look at a summary published by The Local:

Under the new law, anyone who organizes or takes part in an “unauthorized protest” could be fined between €30,000 and €600,000 if the protest takes part near institutions such as the Spanish parliament.

Disrupting events such as public speeches, sports events or religious ceremonies could face fines of between €600 and €300,000.

The Spanish tradition of getting together with mates for outdoor drinking sessions looks to be officially over – drinking in public will be hit with fines of €600 under the new law. And teenagers won’t escape – Parents will be held responsible for the payment of their offsprings’ fines.

Using Twitter, Facebook or Instagram to call on people to protest will be fined under the new law, an attempt to put paid to the spontaneous protests that have proved very powerful in building the indignado movement.

People will be fined for taking unauthorized photographs of the police, a measure introduced with the argument that being publically identified could put officers and their families in danger.

It puts an end to the laissez faire attitude that has seen Spain become a nation with one of the largest potsmoking populations in Europe. But from now on lighting up a joint in bars or on public transport could result in a fine of between €600 and €30,000.

7) Leaving furniture in the street

It is a tradition that has existed in Spain long before the current upcycling trend but from now on dumping unwanted furniture in the street could come with a penalty. Those caught obstructing streets with old furniture, cars or other unwanted items will be fined.

8) Trying to stop an eviction

People trying to stop an eviction from taking place could be fined between €600 and €300,000. The number of evictions in Spain has skyrocketed since the beginning of the economic crisis. New Barcelona mayor, Ada Colau has been a famous anti-eviction activist.

9) Not having your ID

Spaniards who are asked to show their ID card and do not have it on their person could be in trouble under the new law. If they cannot immediately locate it at home and have failed to report it missing, they are liable to be fined.

Showing a “lack of respect” to those in uniform or failing to assist security forces in the prevention of public disturbances could result in an individual fine of  between €600 and €30,000.