Prime Minister Stephen Harper says one of Canada’s greatest mysteries now has been solved, with the discovery of one of the lost ships from Sir John Franklin’s doomed Arctic expedition.

“This is a great historic event,” Harper said.

“For more than a century this has been a great Canadian story.… It’s been the subject of scientists and historians and writers and singers. And so I think we have a really important day in mapping together the history of our country,” the prime minister said.

At this point, the searchers aren’t sure if they’ve found HMS Erebus or HMS Terror. But sonar images from the waters of Victoria Strait, just off King William Island, clearly show wreckage of a ship on the ocean floor. 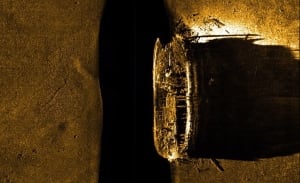 A sea floor scan reveals one of the missing ships from the Franklin Expedition in an image released in Ottawa on Tuesday. (Parks Canada/Canadian Press)

The wreckage was found on Sept. 7 using a remotely operated underwater vehicle recently acquired by Parks Canada. When Harper revealed the team’s success at Parks Canada’s laboratories in Ottawa Tuesday, the room burst into applause and hollering.

“This is a day of some very good news,” Harper told the assembled group of researchers, some of whom had flown all night to be in Ottawa for the announcement.

“It appears to be perfectly preserved,” Harper said of the ship, adding that it has “a little bit of damage.”

Harper said the “latest, cutting-edge technology” Parks Canada used was integral to finding the ship under layers of growth on the ocean floor. “With older technology, you could have come very close to this and not seen it at all.”

Ryan Harris, an underwater archeologist who was Parks Canada’s project lead for this year’s search, said the wreck was “indisputably” one of Franklin’s two ships.

“It’s a very substantial wreck,” Harris said, putting to rest earlier fears that Franklin’s ships may not be found intact after so many years.

The sonar image shows some of the deck structures survived, Harris explained, pointing out the stubs of the masts which were apparently sheared away by the ice when it sank.  Because the deck is relatively intact, the contents of the ship “should be very, very well-preserved.”

The next step for the search team will be to take a look at what’s inside.